Team6 Game Studios and publisher Lion Castle have announced the release of Taxi Chaos onXbox One, Playstation 4 and 5, and Nintendo Switch.  This fresh take on the classic taxi driving games will allow players to pick up and drop off customers around the city of New York in a nice yellow cab.  See the game’s launch trailer below for a glimpse at the gameplay. 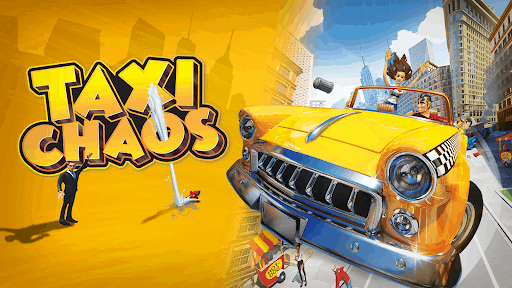 There’s a range of different cabs to unlock and players will find that each one has different attributes once they get behind the wheel.  Players will be able to take a powerful muscle car through midtown or speed down the West Side highway in a sleek European-style supercar.  As cabbies progress through the game more cars will become available to unlock.

There’s a vast city to explore with many New York-inspired locations to find.  Pick up a wealth of crazy customers and discover shortcuts, drift round corners, power through busy streets and attempt seemingly impossible jumps.

There’s several different modes awaiting would-be taxi drivers, from tackling the classic experience of Arcade mode, exploring at your own pace in Freeroam, to taking on a real challenge in Pro Mode.

“It has been two decades since we saw a new game focused on the adventures and excitement of being a taxi driver. With Taxi Chaos, we set out to create a throw-back dedicated to the amazing and memorable classics”, said Jorden Stocx, Lead Game Designer of Taxi Chaos. “Of course, this is not a direct sequel to the classics, however, we hope that players will welcome Taxi Chaos as a fun and fresh take on this long-lost genre.”

“The enthusiasm and replies all over the world have been overwhelming since the announcement of our title. This has motivated the team to improve the game even more, by adding new music, extra citizens, and tons of other updates in a patch”, said Ronnie Nelis, CEO of Lion Castle. The patch will be available as of day one for Xbox One and PlayStation 4. It will soon follow for Nintendo Switch in the next few weeks. The full list of updates will be enclosed soon.