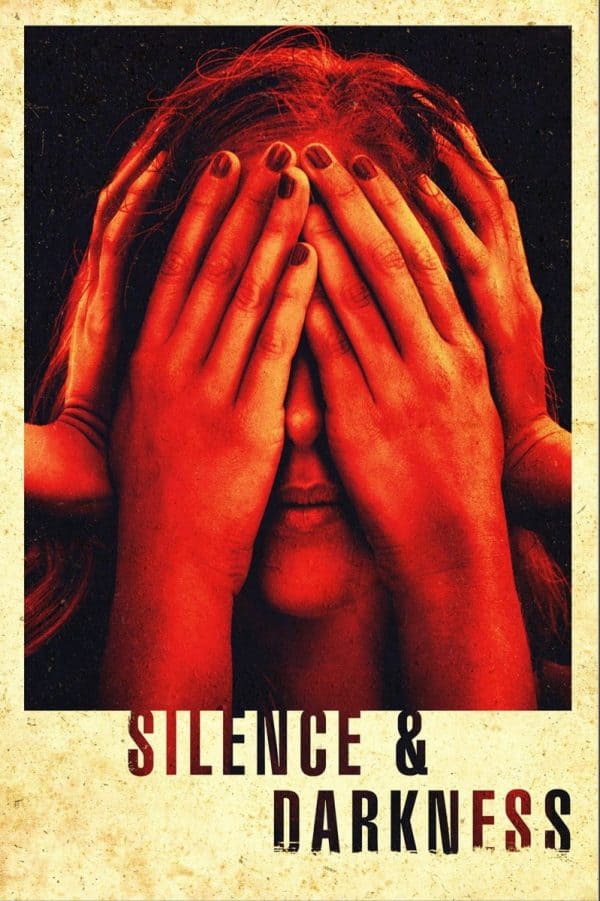 Blind and deaf sisters, Anna and Beth, live happily in a secluded small town with Father. However, when a neighbor stops by, Anna and Beth begin to realize Father’s intentions are more sinister than they could have imagined.

I take my ability to see and hear for granted, and I worry about how I would cope if I were to lose one of those senses. It’s a worry that stems mainly from possibly being unable to enjoy parts of my life that require sight and sound (I wouldn’t be able to do this job for starters). However, it’s also a fear that I would lose the ability to notice those around me who might wish me harm. This brings me to this review’s subject; Silence & Darkness, a film in which the danger could be lurking right in front of us, if only we could see or hear it.

The acting of Mina Walker, Joan Glackin and Jordan Lange are uniformly excellent, their performances being the film’s greatest asset. Walker and Glackin light up the screen as the blind Anna and the deaf Beth respectively, their chemistry shining through every scene as sisters with an unbreakable bond. This chemistry becomes especially apparent when you consider that all of their dialogue together is conveyed via tactile sign language (the touching of hands), the actresses seemingly natural skill at depicting these interactions making their relationship appear genuine and affectionate.

While they are brilliant together, individually, the actresses are equally superb. Walker particularly stands out in a scene in which, after being left home alone, she play-acts a family dinner, taking on the role of her absent father and sister. It’s a sad moment in which Walker expertly conveys her isolation and increasingly fragile mental state. Glackin, who only speaks through sign language, admirably succeeds in depicting her thoughts and feelings via subtle gestures and body language that leave little doubt about her emotional state.

Lage, as Father, is superb at manipulating audience expectations with his increasingly unsettling performance. A man who begins as a loving father tending to his daughters before gradually revealing himself as a far more sinister presence. Lage nails the balancing act between a likeable paternal figure and the much more sinister hidden one, subtly changing his demeanour throughout.

The story is minimal with our protagonists Anna and Beth seemingly living a pleasant life singing Bob Dylan or enjoying an evening celebrating their fathers birthday. The story’s darker elements are conveyed primarily through suggestion, with just enough information revealed and withheld to keep viewers in suspense about what fate might befall our characters.

The visual style is clinical and cold, full of static camera placements and long lingering takes that can stretch on for several minutes at a time. The camera rarely moves, not even tracking or cutting upwards to show a face when someone is standing up, creating an uncomfortable atmosphere at times, listening to voices without faces. Tellingly, the camera only ever moves into a handheld approach during periods of heightened emotion, one such instance is a scene in which Anna attempts to help a sick Beth, only to be thrown back repeatedly by Father. At this moment, the camera is anything but still, frantically shifting around as if mirroring Anna’s increasing desperation. It’s all beautifully shot, with the static shots allowing for the increasingly tense mood to sink in, with the lack of a musical score lending the film an eerie quiet stillness.

While it has many excellent qualities, the pacing proves to be the most glaring flaw holding the film back. Silence & Darkness is not a long film by any stretch, clocking in at a mere 81 minutes. Yet, the slow-burning approach and constant long takes, although beautifully filmed, soon make this short time frame crawl past.

Things do pick up in the ending with a short but novel sequence that allows us to see events from the Anna and then Beth’s points of view in a fashion that reflects the title. I also applaud how the film reveals the truth behind Father’s actions, doing so (without spoiling too much) in a suitably quiet and disturbing revelation.

Despite some pacing issues, Silence & Darkness stands out as a refreshing low-key and engaging drama/thriller that mostly succeeds thanks to its precious meticulous direction, unsettling atmosphere and a trio of superb acting performances. Check it out if you’re curious.