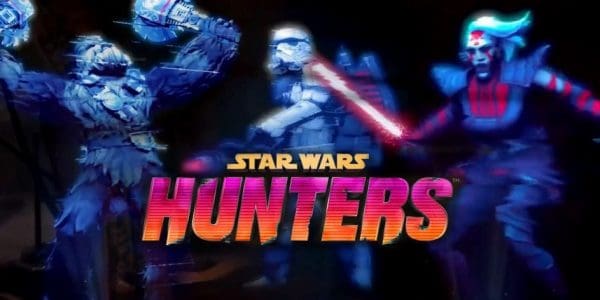 Lucasfilm Games and FarmVille developer Zynga have announced that they are teaming up to bring competitive arena combat to Nintendo Switch and mobile devices with Star Wars: Hunters, a new free-to-download game which promises to “bring players together to engage in thrilling, team-based, multiplayer battles featuring a diverse array of distinctive new Star Wars characters.”

“Star Wars: Hunters draws inspiration from classic Star Wars stories and settings, but with a look and feel that is different from anything we have done before,” says Douglas Reilly, VP of Lucasfilm Games. “We’re thrilled to introduce this wildly creative cast of characters to our fans on Nintendo Switch, where they can join with their friends in thrilling battles at home or on the go.”

Here’s the first teaser for Star Wars: Hunters, which was released during this week’s Nintendo Direct:

Star Wars: Hunters is set after the fall of the Galactic Empire and will allow players to take part in real-time arena battles, playing as Bounty Hunters, Rebellion heroes and Imperial Stormtroopers. It is set to release on Nintendo Switch and the App Store and Google Play later this year.