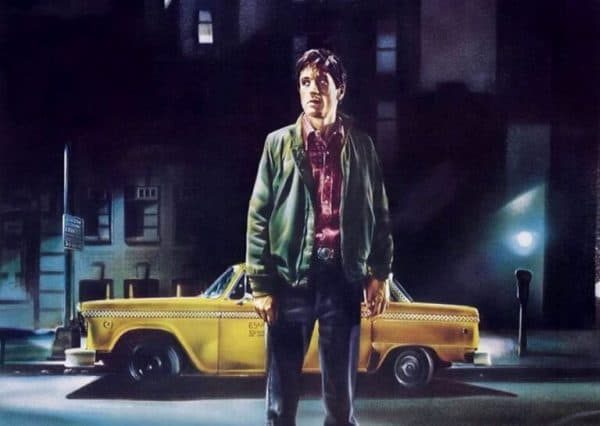 You may look back on a number of films considered greats of their day. Some will inevitably age or lose their impact. Maybe they’ll look rough around the edges or decidedly quaint in their style. Others, year upon year, continue to feel just as fresh as they did upon release. One such example is Martin Scorsese’s iconic masterpiece, Taxi Driver.

For a number of reasons it may well be his most renowned and possibly revered films, pushed very close by the likes of Raging Bull or Goodfellas. However, Taxi Driver has a unique immortality all of its own and a very decided influence on cinema that still remains strong. For one, 2018’s pop culture phenomenon, Joker was distinctly modelled on Scorsese’s nihilistic tale of isolation and reaction. It’s also been a key source of inspiration for film-makers like Quentin Tarantino and Paul Thomas Anderson. In 1976, Scorsese was still a fresh voice, a new kid on the block. He’d broken out thanks to Mean Streets. With an exceptional and creatively daring script from Paul Shrader and one of the most invigorating young actors of the era in Robert De Niro, Scorsese set about making an edgy, dark and intelligent delve into the mind of an outsider. Travis Bickle, was almost the poster boy for the cinematic outsider. Equal measures of nihilism, introversion, social ineptitude, psychological imbalance (with perhaps a hearty peppering of PTSD) and obsessive compulsion combine in a character who says little but through De Niro, tells us so much.

The sociopathic Bickle, compounded further by insomnia, unravels as his increasingly bleak views on the society he inhabits drive him to contemplate violent action (before inevitably, righteously enacting some). He wants to be important, he strives to first save society but fails, before focusing on saving just the one (Jodie Foster’s impetuous young prostitute, under the thumb of an insidious pimp played by Harvey Keitel). Scorsese has become known for films littered with bravado, and machismo. For charismatic characters who command scenes with brash dialogue and vocal intensity. We saw that in Raging Bull, or Goodfellas. We also saw, with more of a comedic turn, a similar leaning on dialogue with De Niro and Scorsese’s 80’s classic, The King of Comedy (incidentally the ‘other’ key inspiration for Joker). Rupert Pupkin, something of a comparative motor mouth has his own loose grip on reality and social etiquette, and whilst there’s always hidden complexity and nuance in Scorsese/De Niro, it’s a very vocal role. For the pair, rarely have they been so introspective. Bickle doesn’t drive scenes (ironically) through his verbal action. He observes a lot but though he’s seemingly inactive, his mind is always ticking.

That ticking (which almost represents the ticking of a time bomb) is progressively building but it’s also something that De Niro masterfully portrays. It’s one of cinemas greatest challenges; to show and not tell. Scorsese wants us to be allured by Bickle, to want to dig further into his enigmatic psyche, but he keeps us at arms length at occasion. There’s even a sequence with Bickle making a phone call to the woman who unceremoniously dumped him (Cybill Shepherd) where the camera tracks away from our protagonist, disconnecting from him entirely. Among many instances through the film, it’s the mark of a director not afraid to twist rules and experiment. In the truest sense of mastering your craft, Scorsese’s film has conflicting elements that might feel disconnected from the tone of the story. It’s an amalgamation of occasionally contradictory facets that meld beautifully to create something inherently unique. It might be the odd feel that comes from Michael Chapman’s photography and Tom Rolf and Melvin Shapiro’s editing that take this murky and gritty depiction of New York and paint it as oddly ethereal at times (particularly at night where Bickle does most of his alienating work). It might also be the unique and organic score from Bernard Herrmann (of Psycho fame) which mutates in and out of being a mellow jazz piece to crescendos of discordance. Maybe as a whole, in a film which carries several moments of distinct enigma (not least a very suggestive end shot), this defies logic to work so majestically. Yet Taxi Driver does work, spectacularly, imperiously so. Almost inevitably it finds itself as the Scorsese of choice in many best of cinema lists (ranking 31 in Sight and Sounds most recent poll for one). Despite the hideousness of the world it envelopes us in, and the disconnection we have with our protagonist, and the blunt brutality of the violence, it’s enthralled so many.

45 years after the initial release, Taxi Driver is still an awe inspiring piece of cinema. A beautifully shot master class in having total conviction in your ideas and creating a fascinating portrait of a character, we’re all (frighteningly) capable of becoming should our grip on rationality be similarly fractured. Scorsese, so fresh and vibrant here still makes great work to this day, always focused on character. Will he ever make something as intriguingly elusive, as fantastical yet grounded, as Taxi Driver again? Will anyone? What are your thoughts on Taxi Driver? Let us know on our social channels @flickeringmyth…