Variety reports that Thomas Jane (The Expanse) will reprise his role of the gritty gun-for-hire Malone in a sequel to 2009’s neo-noir thriller Give ‘Em Hell, Malone written by Mark Hosack, the screenwriter for the original film. 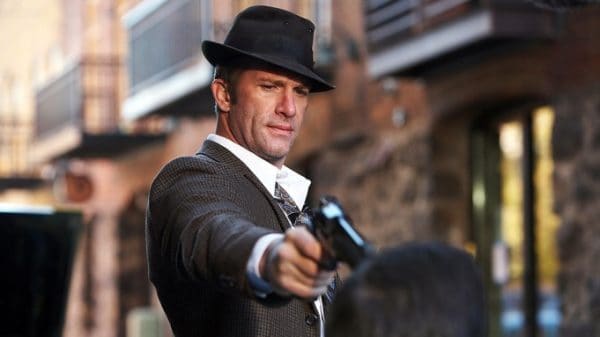 Give ‘Em Hell, Malone first premiered at the 2009 San Diego Comic-Con. Directed by Russell Mulcahy, the film starred Jane as a private detective turned gun-for-hire who survives a set-up and investigates who tried to have him killed. Starring alongside Jane was Ving Rhames (Mission: Impossible – Fallout), Elsa Pataky (Fast Five), and French Stewart (3rd Rock From The Sun).

The sequel is an “against-the-clock” thriller where “Malone reemerges after a decade of hiding from his past. When a chance encounter suddenly exposes him to the world and a sinister attack puts a ticking clock on his chances of living, Malone sets out to find the man who is trying to kill him.”

The Give ‘Em Hell, Malone sequel will be produced by Jane and Courtney Lauren Penn’s Renegade Entertainment alongside Hannibal Media’s Richard Rionda Del Castro. Hannibal Media will finance and distribute the film worldwide.

“Malone has always been one of my favorite characters and we’re all thrilled that the original film found such a devoted fanbase,” said Jane. “I couldn’t stop thinking about where Malone would be now and where he is headed.”

“We’re determinedly irreverent at Renegade, and Malone is about as irreverent as it gets,” said Penn. “Thomas and I approached Mark with a wild idea to see where Malone is in his life 10 years later: where is the unkillable gunman? Dying we supposed… but how? Who did it? And can death redeem him? We all tossed around themes and ideas and Mark turned in a script that blew us away.”

Production on the untitled sequel is expected to begin summer 2021.