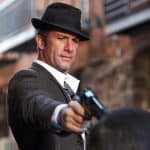 Variety reports that Thomas Jane (The Expanse) will reprise his role of the gritty gun-for-hire Malone in a sequel to 2009’s neo-noir thriller Give ‘Em Hell, Malone written by Mark Hosack, the screenwriter for the original film. Give ‘Em Hell, Malone first premiered at the 2009 San Diego Comic-Con. Directed by Russell Mulcahy, the film […]