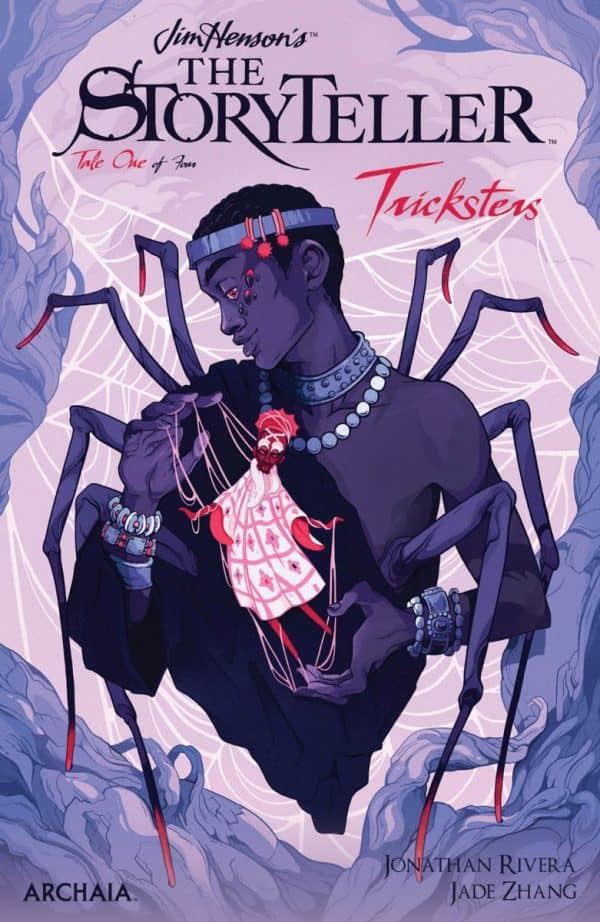 The Storyteller series always reminds me of childhood, sitting in front of the TV and being lost in the wonderful tales being told. The comics of The Storyteller are very much the same, yet we have a lot more stories and a lot less restrictions putting these tales down into a comic.

The wonderful thing about this series is that is focuses on stories of tricksters, and issue #1 tells us a tale about Anansi, the trickster god of the sky, half man and half spider; there are a great many tales of Anansi if you know where to look. While we do get ready to get tucked into a tale of Anansi, we first start off with the Storyteller himself, in his home.

The picturesque cabin in the woods homes the great Storyteller – if you have a single off topic thought, you can guess he has a story about it. The set up for the story lies with the introduction of a spider in the house, which leads to the conversation of how spiders are actually useful. Then the topic moves over to “a guy that has a spider for a backside”, so you know logical leaps and bounds.

This is a wonderfully humble story of deceit, cunning and obstacles, for these are the conditions in which Anansi thrives. The challenge facing our leading man is a task set out to capture three  impossible creatures and return them to his father in exchange for all the wisdom of humanity. I will not break down the entire issue, but rather leave you with that lovely thought. It is not so much Hercules and his labours, instead this plays out slightly more than a brain teaser for Anansi.

The art direction within this comic is beautiful; a faithful recreation of the Storyteller is one thing, but the African landscapes are something else all together. The conversation between Anansi and his father was a wonderful mix of colour, design and attention to detail. The issue’s “trippier” sections towards to end get a very clear message across while not spending too much time explaining itself.

Overall I very much enjoyed this story. While the length of the issue is not going to compete with Tolkien, the complete story is enjoyable and coherent. I would recommend this to people who are possibly looking for something a little different to break up the normality of their day to day reads.