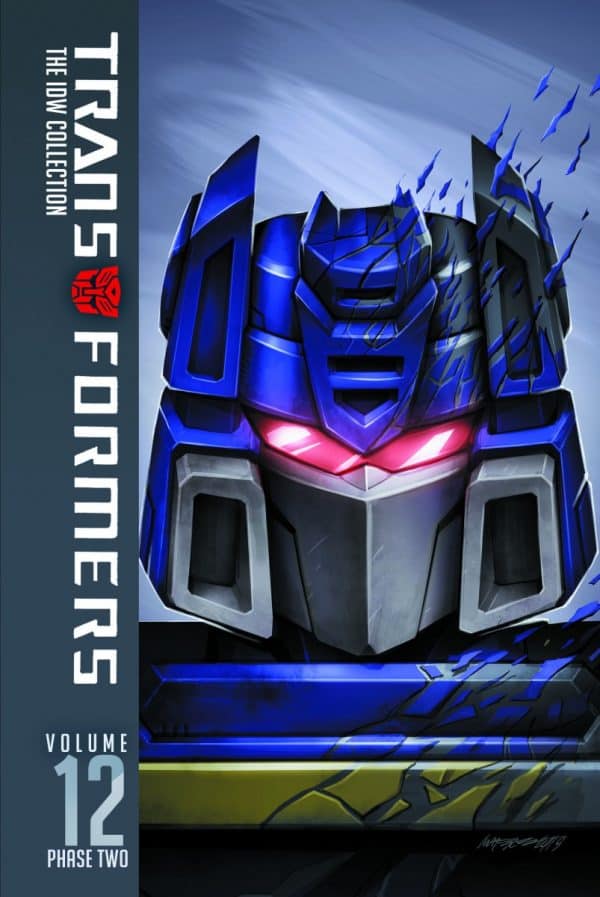 The end of IDW’s previous Transformers continuity has come with the twelfth volume of Transformers: The IDW Collection Phase Two. For a collection focused on providing a conclusion of sorts and laying the groundwork for the new status quo as IDW merged all of their Hasbro properties into a shared universe, the twelfth volume does a great job of telling one fairly cohesive story through the multiple Transformers series. It definitely offers a certain amount of closure both to readers and the characters while opening up some very interesting doors to follow in IDW’s third phase.

The latest volume picks up right where the eleventh ended with Optimus Prime having annexed Earth into Cybertron’s Council of Worlds, taking a rather drastic step in order to protect humanity from Galvatron and his forces. Barber writes a compelling finale for this iteration of the Transformers series as Optimus grapples with new responsibility and the challenges he faces as he is accused by humanity and even his fellow Cybertronians of using very authoritarian methods to achieve his goals. One such instance is his willingness to blackmail Soundwave, tying it back to one of Soundwave’s actions from the very beginning of Barber’s series, but even that holds some surprises too as their relationship turns from one borne out of reluctance and mistrust to seemingly genuine friendship. It’s not very often Optimus and Soundwave get one-on-one time in any Transformers media and Barber takes full advantage of that to further their character arcs. Soundwave in particular gets some pretty interesting material as he comes full circle, finally realizing the wrong the Decepticons have done to Earth and the rest of the galaxy. After being so upset at Megatron for doing the same thing at the end of Dark Cybertron and the pages of More Than Meets The Eye, it is very gratifying to see him come to this epiphany with Optimus’ help.

After the battle with Galvatron is concluded, Barber wraps the story up by re-introducing Sentinel Prime, the Autobot leader in charge when the war with the Decepticons began and was killed by Megatron himself. Barber harkens back to plot points from all the way back in IDW’s Megatron: Origin and updates it to fit into the vast mythology of his Transformers story. It ties up a lot of loose ends from revelations made in this and the previous volume of IDW’s Phase Two collection while planting seeds for the next phase. That also includes IDW’s mandate to create a shared universe of all their Hasbro properties as the G.I. Joes are brought in to fight the transformers and act as Earth’s security against them. There are a couple references made to events from IDW’s separate G.I. Joe series, likely to explain away where the Joes have been and why they haven’t fought the Decepticons before now, but Barber’s introduction to them is effortless as he catches any unfamiliar readers up pretty quickly and makes the few G.I. Joe characters who do appear fit in naturally.

While the battles on Earth rage on, Mairghread Scott follows the events on Cybertron in the new series Transformers: Till All Are One, focusing on Windblade and her allies trying to subvert Starscream’s schemes to gain more power in Cybertron’s government and the Council of Worlds. Windblade is very interesting in this arc as she balances her desire to catch Starscream in any act of crime or corruption and that of her morals, even as he’s blackmailing her in an attempt to do his bidding. Scott captures the fraught politics of Cybertron quite well as Windblade, Starscream and others maneuver around each other, especially from a group of rogue Decepticons who want to bring Starscream down just as much as Windblade but don’t trust her or any of the Autobots to do it. Scott’s take on post-war Cybertron and the tensions between all the bots from Cybertron and its colonies are some of the most intriguing aspects to this series, but her character work is really great too as she examines how each one views the new system and adapts for better or for worse.

Closing out the collection is James Roberts’ More Than Meets The Eye and while his big finale to his story arc was dealt with in the previous volume, the final send off here is pretty good too as Roberts utilizes some of the supporting characters from the series and ties it into Sentinel’s return, giving a proper conclusion to that story. It is not very often More Than Meets The Eye overlaps with the main Transformers series, but it works very well here as Prowl and others team up to stop Sentinel’s plan. In fact, Volume 12 feels like one very cohesive story of its own as the three series tie into and build off each other, making it much more connected than a few of IDW’s other volumes.

The artwork throughout the book is great as Andrew Griffith, Livio Ramondelli, Priscilla Tramontano and Sara Pitre-Durocher create very detailed and animated visuals. The facial expressions on both the bots and humans are expressive, the action is clear and easy to follow and they put a lot of emphasis on the body language of the various Cybertronians. The colours from Joana Lafuente, Josh Perez, Josh Burcham, Ramondelli and Tramontano also make very vibrant images throughout the whole book. As the final volume to Phase Two, it is very satisfying to see the work from both the writing and art teams giving their all to close out these storylines.

Transformers: The IDW Collection Phase Two – Volume 12 is a worthy conclusion to this part of IDW’s Transformers continuity. The stories from the three series tie into each other very nicely and make this collection far more cohesive than some previous volumes. Barber, Roberts and Scott do some wonderful work with the characters while the artwork from the whole team is rich and detailed. Transformers fans who have followed these series will be pleased with how this collection presents them before IDW’s merged universe in Phase Three and the beginning of the final portion to the company’s previous continuity.