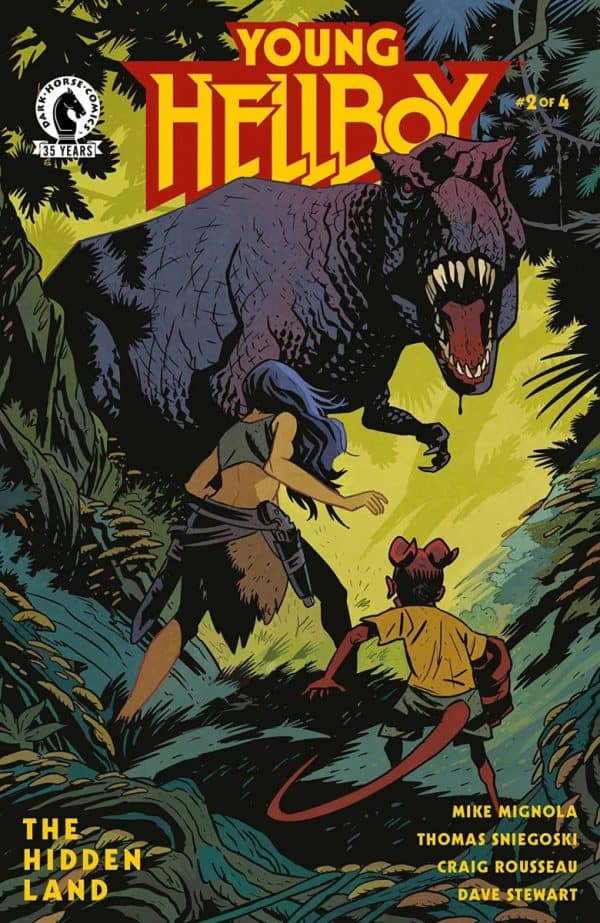 In this latest adventure into the Hellboy timeline, we have a Mysterious Island, a plane crash, a Tyrannosaurus Rex, and more questions than answers. All of these incidents combined still do not even break the top 10 for weird situations Hellboy has found himself in.

As the name suggest, the current story takes us to an earlier time period when Hellboy was a far more optimistic character, and the thoughts of exploring the world were still a relative fantasy to him. The Hidden Land is very much about a young, excitable and wide eyed character on a very interesting journey.

The issue opens with a explanation as to who Hellboy’s female rescuer is, how she came to fame and, more importantly, our titular hero’s attention. Once the introductions are over it’s back to the weird jungle and the even stranger events that take no time at all to get up and running, showing some amazing character transformations before Hellboy and Professor Bruttenholm are reunited.

The story within the issue is more about building up the backstory of Scarlett, as she appears to be one of the main characters in the series going forward. Meanwhile the last act in the issue certainly does give the reader a flavour of horror that might have been missing so far from a Mignola creation.

The character artistry is once again something to behold in this issue, and the way in which everyone is unique and yet not overly complicated. There is a section of the comic where three apes appear and yet each one of them is drawn with unique features to differentiate them from one another. These are simple touches that show artists have went the extra mile and not just settled for a generic copy and paste job. The level of dedication found in the pages of any Hellboy comic I have read so far is testament to the creators.

The last pages of this issue certainly hijacked the type of story we started with, and it manages to swap genres from monster movie vibes to a more demonic showcase. The anticipation is now building for the next issue, and another glimpse into the minds of this fantastic creative team behind the comic.