In My Shadow is a platforming video game developed by Playbae and published by Alcon Interactive Group that is currently in playtest mode on Steam. Its eccentricity revolves around manipulating shadow projections for the sake of creating pathways around obstacles on a flat plane. The question is, how fun is it? The short answer is it’s not only a blast, but also boasts a surprisingly emotional story. For the longer version of our first impressions, read on!

If I had a quarter for every time I’ve mentioned the pointlessness of a narrative in a platformer, I’d have enough change to buy some ice cream. Rarely do you see a genre based on timed movements and wacky action invest any effort into a deep plot. And why should it? In a way, the story is the level design itself, a yarn full of thrills and joy created via player agency. 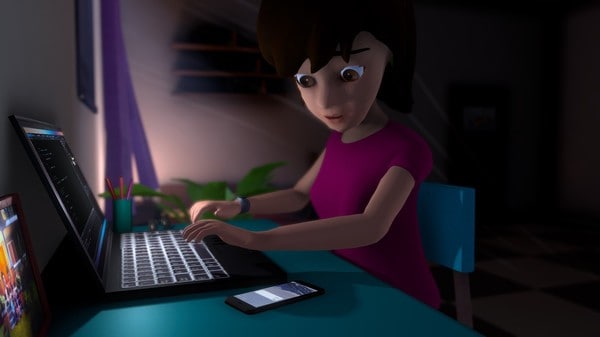 And yet, I’ve always felt that there was untapped potential. Sure, you can focus your attention primarily on the gameplay, but is there a need to make a choice? In My Shadow proves that there isn’t and never was. The game is centered around an unnamed young woman, who, upon receiving a text from her father, undergoes a memoria crisis. She has not spoken to the rest of her family in years, and through flashbacks, relives and reflects on key moments in her childhood where she felt she made regrettable decisions. Such moments of penitence include: ignoring her dog’s pleas for attention, getting into pointless squabbles with her brother, and not respecting her mother when she was going through a difficult time.

For younger players, In My Shadow’s story probably won’t have much of an impact as they are currently undergoing their adolescence, but to fellow gamers past their early-20s, I can say that it will hit you hard. Or at least it did to me. There’s no voice acting, yet the dialogue remains powerful through tightly-scribed sentences that encapsulate the woman’s inner thoughts perfectly without falling prey to the superfluous nature of a stream of consciousness. She summarizes the memory and details what happened before ultimately explaining why it causes her pain to dwell on it. These recollections are revealed after completing every 2-3 levels, giving them a reward quality whilst preventing them from feeling extraneous and overly-sentimental. I guarantee you any adult who has had even a pedigree of remorse will be empathetic to the situations on screen. 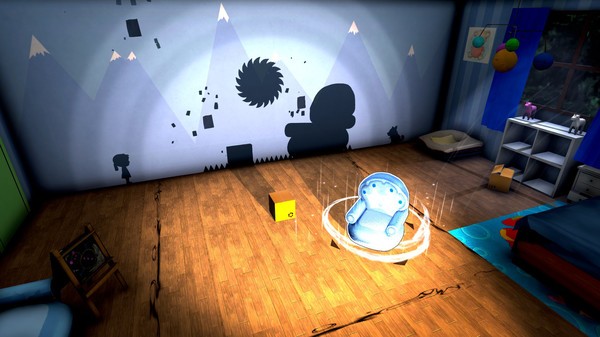 Part of what makes In My Shadow’s narrative work exceptionally well is its thematic relationship with the visuals and objectives present in the gameplay. You’re playing as a silhouette, symbolizing how distant and empty the protagonist feels about her existence (and considering the title and dialogue within the game directly references this, I don’t think I’m reading too much into it!). The goal of every level is to reunite with a family member stationed at the end of the area: only reaching them prompts their dark figure to dissipate into thin air, and your own character to look down in sadness. It truly is a well-designed structure.

Unfortunately, in the graphical department, things aren’t quite as consistent. You have three different art styles going on here: the main one for cutscenes, a secondary one for select cutscenes, and a third one for the general gameplay. The first one is downright ugly. I hate to be blunt, but there’s no other way to put it. Playbae went for some claymation-esque aesthetic, and the results are characters with doughy-looking skin. The texturing is fine as far as there being no fuzzy finishes on any of the subjects, but it hasn’t been compiled properly. Hair is plopped on like a wig, eyes are dead and sunken-in due to improper facial epidermis wrapping, and fingers are grotesque, more akin to mini-claws than human digits. It makes me wonder if the budget for this section of the graphics got short-changed during production, a theory that is supported by the aforestated second visual facet- certain cutscenes replace the doughlike models with versions that seem to be have been conceived in Adobe Flash. Everyone looks a lot cleaner and solid: it’s the same artistic wheelhouse as its predecessor, but the difference in quality is noticeable, making me wish that this had been the standard for all the other cinematic moments. 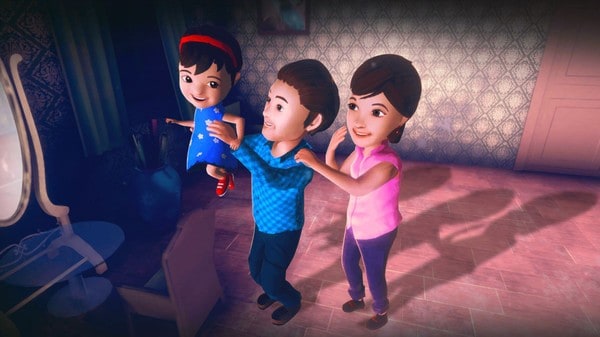 But these filmic parts aren’t what you will be spending most of your time viewing: that portion is reserved for the main game, which is very beautiful. In My Shadow is divided into chapters, each chapter set in a room ranging from a children’s bedroom to the main foyer. All of these chambers is distinctly handcrafted, showcasing strong planning from the game’s artisans. Looking at the aforestated kid’s sleeping quarters, for example, we see drawings and pictures hung on walls that echo a child’s sketches, carpeting and toys resembling something you’d buy a youngster at a store, and even a cot for Fisker the Dog. That kind of attention is given to every stage I played.

The constants for each level are also superb, beginning with the wood floors, which are lacquered and polished, as well as the boxes, desks, and other pieces of furniture that you maneuver, which look like authentic replications of what you’d see in real life (though obviously miniaturized). It’s not that they’re completely photorealistic, but they’re definitely not as stylized as the previous two I talked about. 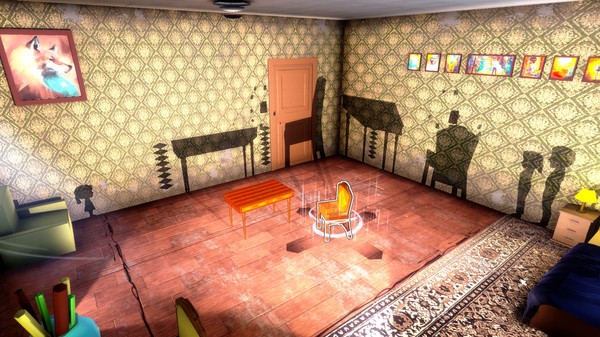 Interestingly, with shadows being a prominent feature of this title, you would expect the lighting to be particularly fashioned for the sake of dynamism, but that isn’t the case here. The lighting in In My Shadows comes from a static source off-screen that does not waver. While I was disappointed at first, I quickly realized that this actually made more sense given that you’re essentially dealing with shadow puppets, a concept that would be made far more complicated if you also gave players the ability to modulate the luminescence.

Continuing onto the soundscape we begin with the SFX, as there is no voice acting. Every item that you move has a distinct din to it, however it’s all pre-programmed: there’s no variation, as dragging them in any direction against any other object gives the same sound played on a loop. Other actions like jumping and landing don’t even have a resonance to them. Overall, I’d say the sound is adequate given the short duration of each area, but it definitely could’ve been a lot more intricate. Finally, the score is good, but not diverse enough. The music hits that right chord between nostalgic sentimentality and emotional anguish, but I swear I only heard one composition per an area, which I felt was missed potential. 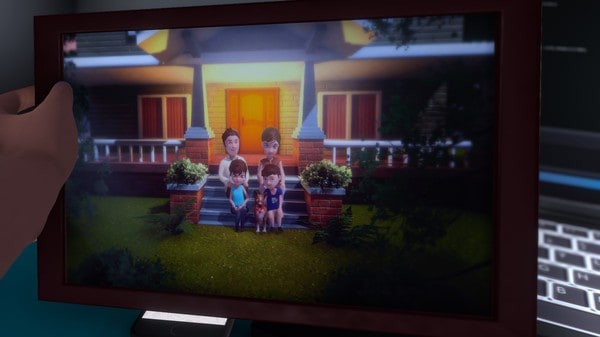 Next, we come to the gameplay. Like other platformers, In My Shadow contains the basic premise of getting from one side to the other. Where it differentiates itself, of course, is in the umbra-driven mechanics. Via the click of a button you switch from controlling the main character to controlling one of the chattels in the foreground, with the goal being to situate these instruments to generate appropriately-sized platforms through their accompanying shadow. Each set of items have their own range of motion: some are immobile, others can only slide in one direction, a few are capable of turning, and a select number fall apart upon being stepped on once amongst a plethora of others. By way of a smartly-done progression system in the vein of Portal, these new variations are introduced gradually, giving the game a subtle yet natural learning curve that never stumbles into spike territory.

Honestly, the greatest compliment I can say about In My Shadow is how much it reminded me of Super Mario Sunshine (and really, Nintendo’s approach to 3D platforming, which I know sounds strange for a 2D game, but bear with me). In Sunshine, there was rarely a set way for you to go about accomplishing your tasks: you could do a variety of leaps and aerial hydro pump tricks to traverse from building to barrier to whatever was within reach. And that was how I felt playing In My Shadow. Aside from the tutorial sections and some of the later levels, there’s a lot of freedom given as to how you can go about getting to the very end. Whether it’s positioning appliances, deciding on shadow size, or opting to do a good old-fashioned long jump at the very edge of a fixture, not once did I believe I was being goaded into finding a linear solution the devs wanted me to utilize. 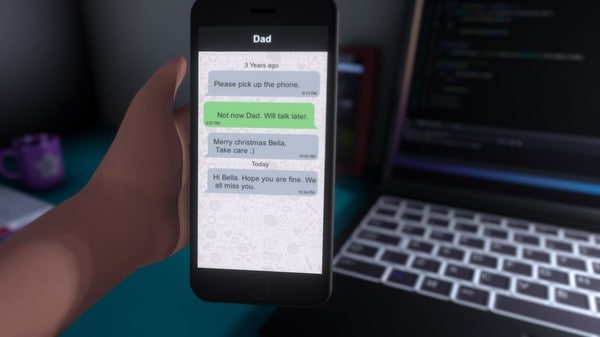 Now, as In My Shadow is still in early access, it should be stressed that it isn’t complete and is prone to changes. However, I do need to point out that I experienced a couple of bugs. The first was that, occasionally, the menu of options would freeze up, forcing me to relaunch the program. The second flat-out prevented me from swapping from person to box, ironically preventing me from progressing further in the game; any attempt at fixing this resulted in the game freezing up and prompting another boot up.

I hope those two are fixed because, outside of them, this was one of the best platformers I have played. Sharp level design, an uncommonly affecting story, and a competent acoustic environment make a unique platforming game even more enjoyable. Assuming the end product is the same, I will highly recommend it.