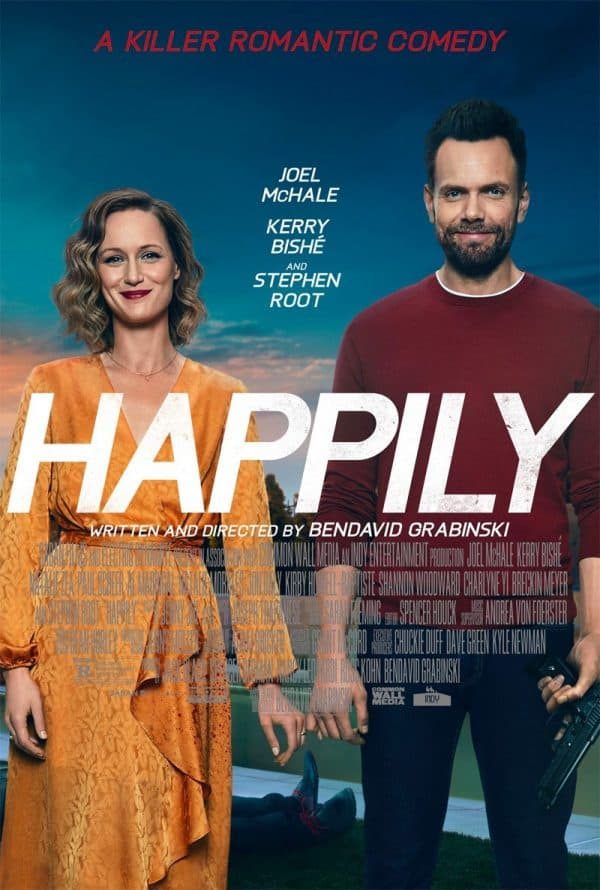 A dark romantic comedy. Tom and Janet have been happily married for years. But a visit from a mysterious stranger leads to a dead body, a lot of questions, and a tense couples’ trip with friends who may not actually be friends at all. 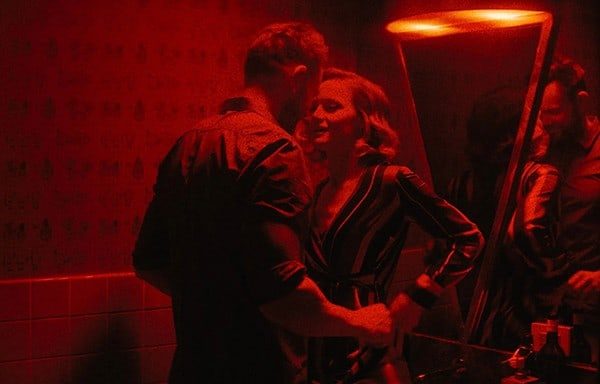 Happily starts off as if it’s going to be a raunchy sex comedy with its central couple Tom and Janet (Joel McHale and Kerry Bishé, playing the perfect relationship practically with intentionally awkward line delivery and as aliens socially that seem to only understand each other) freely getting voyeuristic in the bathroom at a large party amongst friends. Then again, friends might not be the most appropriate term here as Val and Karen (the always funny Paul Scheer and Natalie Zea) are bitter at the fact that these people have the one-two punch of meaningful connection and healthy sex life. One initially presumes that writer and director BenDavid Grabinski is going for either a sex-positive story or possibly a cautionary tale about partners having too much sex (that’s if you’re like me and didn’t watch the trailer, which I honestly don’t even know how you make one for this movie).

Chances are if you gave someone three guesses to predict where this thing goes, they still wouldn’t land on a mysterious secret agent (Stephen Root) showing up at the doorstep of Tom and Janet attempting to inject them with a dosage of… something, that is supposed to make them less horny or more like a normal married couple, or both. It’s as if these people are actually aliens and that their perpetual happiness is a malfunctioning of the brain. Nevertheless, Janet panics and smashes something over the man’s head, killing him, prompting the couple to look into ways to make a dead body disappear 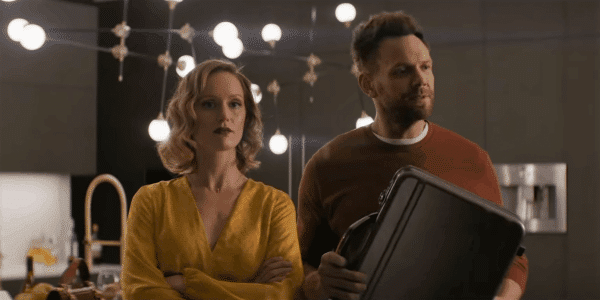 If it sounds like I’m giving a lot of way of Happily, I assure you this is only the first 15 or so minutes. This is a relentlessly strange movie that just takes one bizarre turn after another, but what I will say is the rest of the story involves a getaway at an airB&B between five couples (including the aforementioned two) where Tom and Janet come to the conclusion that the only reason they have been re-invited by their friends is that all of this was an elaborate prank that has turned gravely serious now that there is a dead person.

The smartest thing BenDavid Grabinski does here is skillfully setting all of this up to a degree where we don’t know what the hell to think either. Horny aliens capable of perfect relationships sound batshit insane, but so does the idea that someone would go that far to prank another. What ensues is Tom and Janet having casual conversations with the other couples attending (previously mentioned with and Karen, a lesbian couple played by Shannon Woodward and Kirby Howell-Baptiste, a couple going through a rough patch played by Natalie Morales and Jon Daly, and a relationship concerning for an entirely different set of reasons involving Charlyne Yi and Breckin Meyer) investigating who could have pulled off such a prank. The majority of these characters are paper-thin and used for dark comedy, but it turns out there is one member amongst them that has a history of cruel jokes. There’s also someone greatly determines to get Tom to cheat on Janet, simply unable to accept or rationalize that he is legitimately happy loving and having sex with the same woman going on 14 years.

The greater message at play in Happily seems to me that communication is everything and that key things need to be talked out (there’s more than one character with skeletons in their closet), but how that connects to a story about people who may or may not be from this world and a shadowy organization trying to clean up such a thing never really connects the way it seems it should. At the same time, the story goes enough strange places that are sometimes fascinatingly psychological. Perhaps it might even have some bitter couples analyzing their own relationship instead of obsessing over the happy ones. Happily is certainly a befuddling yet always intriguing viewing experience that would greatly benefit from a better grasp on its concept that’s bringing marital strife to the surface.