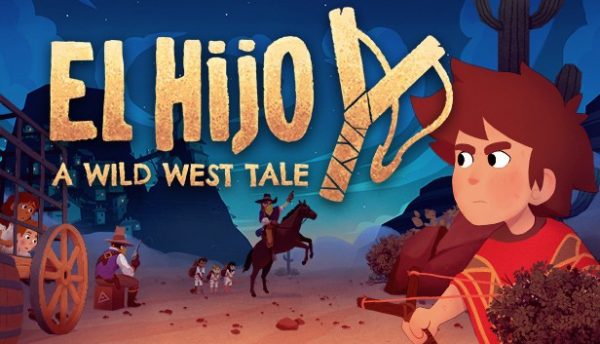 Within the sphere of indie gaming, there are a number of tried and tested genres that rarely. You know, those durable fan-favourites like the pixel-art platformer, the bastard-hard roguelike, and, of course, the ever-dependable: ‘’minimalist adventure about a big-headed child surviving hostile environments’’. For reference on that last category, see Limbo, Little Nightmares, and 2020’s Timelie.

It is to the ranks of these games that El Hijo – A Wild West Tale clearly aspires, imitating the formula with such exactness that it borders on self-parody. Indeed, Honig Studios so thoroughly tick all the boxes that you begin to wonder if their design-document was actually just a reference list of other titles they’ve cribbed fail from. You’ve got the standard-issue puzzles (that normally boil down to pushing or pulling crates, ala Little Nightmares), the cute animal sidekick who pitches in with reconnaissance (Timelie), the silent protagonist searching for a lost relative (Limbo), and quirky stealth encounters that are lifted wholesale from Untitled Goose Game.

And yet, despite feeling so achingly familiar in almost every facet of its design, it’s hard to resist El Hijo’s charms. Billed as a ‘’non-violent spaghetti western’’, the game has you taking on the role of a barefooted, slingshot-wielding troublemaker (picture a 19th century equivalent to Bart Simpson and you’re in the rough ballpark). And your job is to guide this junior delinquent on his perilous quest throughout the American frontier after his mother is kidnapped by a notorious outlaw gang.

The ensuing rescue op is segmented into three discrete acts, the first of which sees the boy escaping his foster home (a draconian monastery cut off from society), followed by a perilous trek across the desert, and finally a daring infiltration mission behind enemy lines. Naturally, each step of this journey is beset with danger and – given that you’re only six years old – combat is not a viable option. It’s therefore imperative that you remain undetected and use your wits to circumvent any dicey situations that might arise. 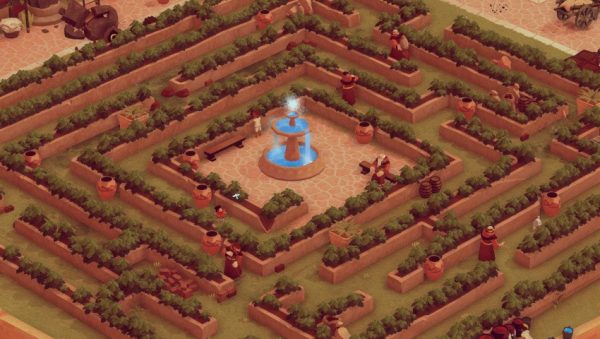 Overseen from an isometric perspective, these stealth scenarios tend to have one highly prescriptive solution in mind. This limited scope means that you can’t afford to improvise or think outside the box very often. Instead, the level-design more closely resembles that of Untitled Goose Game, in that you must follow a series of rigid steps to elude foes, kind of like you’re working through a scripted puzzle. For example, sometimes you might need to stow away in a barrel or cling to the underside of a bison, whilst, on other occasions, you’ll have to manoeuvre a piece of cover or cause a diversion with a nearby murder of crows. Regardless, you won’t really have much choice in how these things pan out, as they’re quite linear.

To be fair, you are given a handful of tools that grant you some leeway in how you tackle sections. However, these items aren’t purely discretionary and can be essential for you to progress from time-to-time. The (non-offensive) arsenal includes the aforementioned slingshot – which can be used to smash light sources and create distractions – explosive cactus bulbs that substitute for smoke bombs, windup toys that lure NPCs to certain spots, fireworks perfect for demolishing obstructions, and a pet bird that highlights enemy vision cones. Not to mention an oversized sombrero that you can hide under, in a manner that is only legally distinct from Solid Snake’s cardboard box.

When everything clicks into place, El Hijo can be incredibly satisfying, as you execute plans with swiss watch precision and interact with the world in creative ways. Yet, at its worst, it can feel a little bit like a game of ‘’guess what the developer was thinking’’, with you awkwardly flailing around trying to identify which individual pixel they want you to stand on at any given juncture.

Indeed, levels range from rather clever to downright infuriating (contingent upon how finicky the corresponding solutions are). Often you’ll beat challenges through what feels like sheer dumb luck or a weird cheesing strategy, when in fact there was no better alternative. Sometimes the correct answer here just feels wrong. 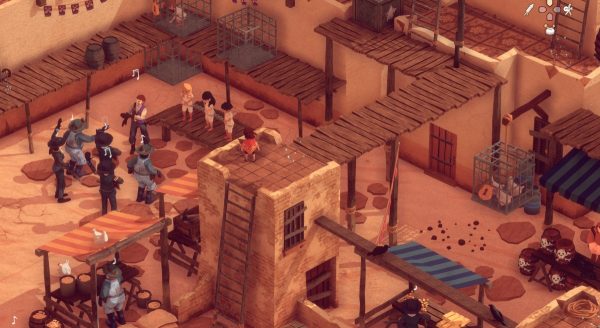 It doesn’t help either that the controls aren’t terribly responsive, adding to the overall jankiness. For instance, aiming the slingshot can be an utter hassle if you’re not positioned exactly right, and the isometric POV makes it hard to distinguish between targets on separate vertical planes. Likewise, the crouch mechanic is inconsistent in terms of what it will allow you to take cover behind and there’s a frustrating delay between you issuing certain commands and them actually being performed. That last problem can be deeply frustrating, especially when later encounters require you to hit beats within a punishingly tight window. Luckily restarting after being caught is near-instantaneous, which slightly mitigates the flaw.

Aside from control difficulties and some obtuse game-design, there were a few technical hiccups that further impeded my enjoyment. Namely, I had to restart entire chapters on a couple of occasions because my avatar got caught on the scenery and there was absolutely nothing I could do to free them. Meanwhile, I was dealt a rough hand with some of my checkpoints activating at inopportune moments – usually when I was on the verge of being discovered – leading to an infinite loop of game-overs. These aren’t pervasive issues, however, if your patience is already being tested by the fiddly controls then it can be enough to push you over the edge.

Despite these complaints, I still had a mostly good time with El Hijo. Although the stealth isn’t too flexible, it’s still exhilarating to have a near-miss with a sniffer dog or to crawl through a raging saloon brawl unnoticed, even if you know deep down that the outcome is largely preordained. The levels revolving around environmental gimmicks are particularly fun, such as the lengthy detour through a darkened mine (wherein you have to escort a getaway cart by lining up the tracks) and a gruelling hike through a sandstorm. My personal favourite though was the inventive train robbery sequence, which has you channelling Nathan Drake by hanging off the sides of carriages, in order to dexterously evade both the onboard soldiers and the pursuing bandits. 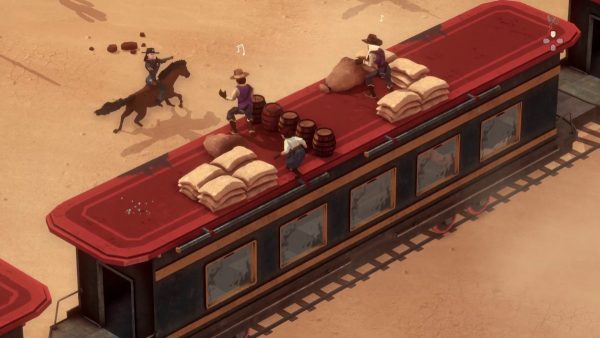 On a related note, the game does a fantastic job of mixing up the rural vistas and taking advantage of its classic western setting. From a visual perspective, this means that the backdrops never get too samey and you’re always exploring fresh terrain. Whether it’s a moonlit campsite, a scorching canyon, or an eerie network of underground catacombs, I was always looking forward to whatever was around the next corner.

The fact that everything is rendered through a nostalgic cartoon art-style is a bonus too, giving the old west a sentimental makeover that the genre rarely embraces nowadays. It’s an innocent and hugely appealing depiction of a by-gone era, one that trades in the harsh realities of the period and ameliorates it into something more wholesome (akin to Frontierland at the Magic Kingdom). Unlike in, say, Red Dead Redemption, there are no references to America’s dark past here, nor are there any gory deaths or tuberculosis-ridden anti-heroes.

Instead, all of that unpleasantness is filtered away and replaced with sweet-natured mischief, as you gradually evolve into the figurehead of a prepubescent, Goonies-esque uprising against the adults. Speaking of which, each chapter has an assortment of meek orphans (toiling away at the behest of corrupt officials) for you to ‘’inspire’’. These basically serve as hidden collectables stranded in hard-to-reach areas and, if you manage to find these despairing tikes, you’ll be treated to an adorable animation in which the boy rouses them from their stupor, and teaches them how to be kids again. As far as secondary objectives go, it’s extremely heartwarming and you’ll be compelled to find them all just to bring a little extra joy into the virtual world.

In short, El Hijo isn’t without its flaws, but they’re all offset by a considerable amount of charm. The game is exceedingly well-paced as well, comprising 29 digestible levels that you’ll burn through in a matter of hours. So, if you’re looking for a breezy counterpart to those darker indie puzzlers that saturate the marketplace, you could do a lot worse than this. 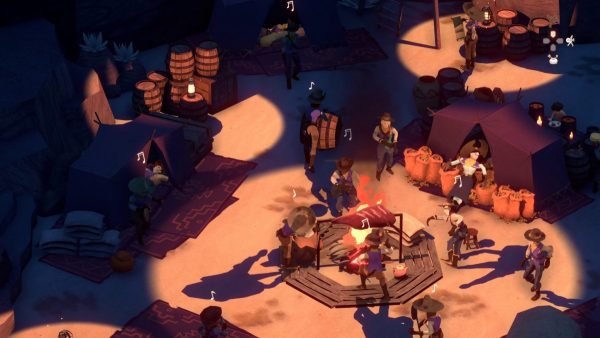 Reviewed on Xbox One.