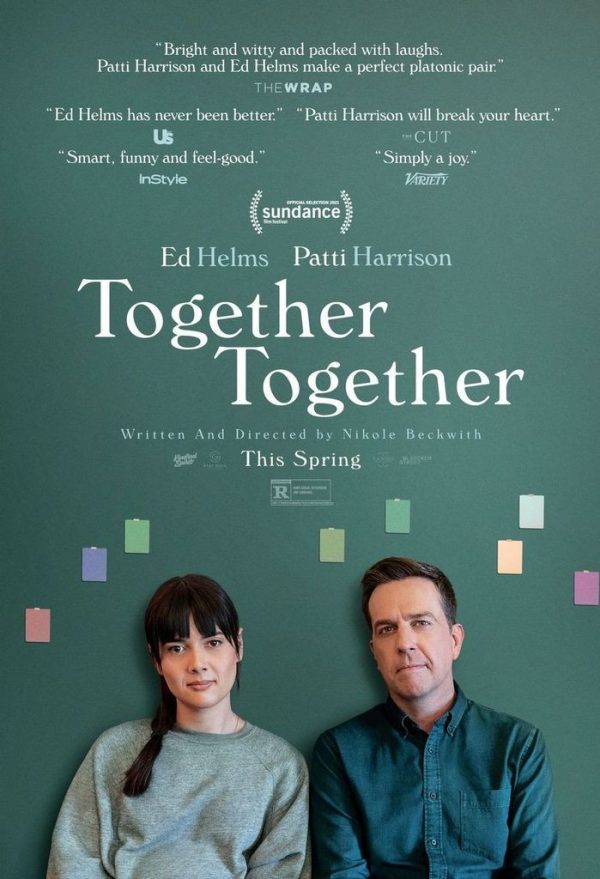 When a young loner becomes the gestational surrogate for a single man in his 40s, the two strangers come to realize this unexpected relationship will challenge their perceptions of connection, boundaries and the particulars of love. 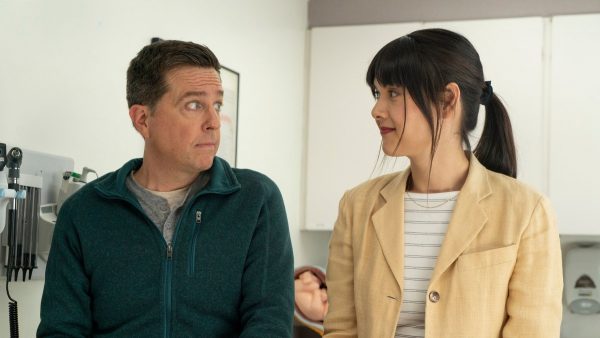 When hearing about a movie starring Ed Helms as a middle-aged single man enlisting the services of a surrogate to become a father, I’d be hard-pressed to fault anyone for getting the vibe Together Together could go wrong at any moment, whether it’s the tone, jokes, or story itself getting an insensitive or overly silly treatment. Fortunately, writer/director Nikole Beckwith smartly sees the uniqueness of the situation and plays off that for fitting humor, but isn’t here to make fun of what or why the character has chosen this path to become a parent.

Wisely, the script isn’t too concerned with getting deep into the past of the participants in this arrangement. Matt (Ed Helms) is single simply because he is; we know he had a relationship that lasted for about eight years that didn’t work out, and considering how harmless the guy is overall and his enthusiastic commitment to becoming a father, it’s all we need to know. Anna (Patti Harrison) is the more complex of the two, having had to put up a child for adoption after becoming pregnant in high school subsequently skipping college, all of which escalated friction between her and her family. She has her reasons for wanting to do this good deed (something that, unfortunately, comes with judgment) that fall in the range of compassion to feeling guilty. Again, Together Together is aware not to harp on what brought these two into each other’s lives, but rather was about to unfold. 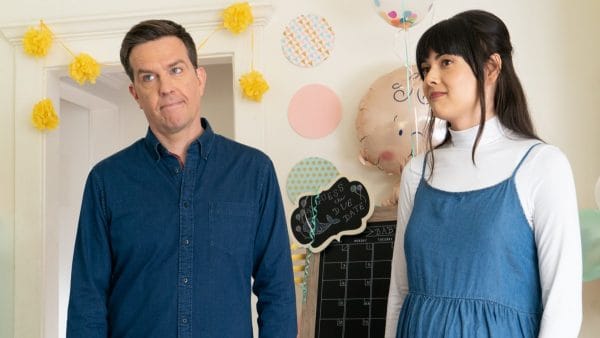 As a matter of fact, the film opens up with Matt interviewing Anna to see if she can carry his child. The interaction is awkward from the first question, with Anna describing herself as a loner and the two having a back and forth on whether Anna not actually getting to be a parent means anything in terms of carrying a child for someone else. Naturally, they enter political waters within Matt blundering his way through explaining his feminist beliefs. It sets an awkward tone that’s pretty much always exists regardless of where the story is going, which is also a tone that assuredly works for Ed Helms (this is his best role in years by a country mile and might even be one of his best performances full stop) and also Patti Harrison who definitely impresses grappling with the journey and purpose of Anna as a person.

For a while, Together Together settles into itself as if it’s a sharply written sitcom, following these two having well-meaning bickers with one another; Matt is appropriately hyper-focused on everything from Anna’s activities to eating habits, some of which are amusingly flipped around on him for humor. Boundaries also come into question as Anna still appears to be having sexual relations with men during the pregnancy, to which Matt initially objects before having a conversation about Anna remaining in control of her own body despite being a surrogate. Meanwhile, both attend separate group sessions about the process receiving conflicting advice on whether it’s best for Anna to become a larger part of Matt’s life and develop a connection with the baby beyond the pregnancy. 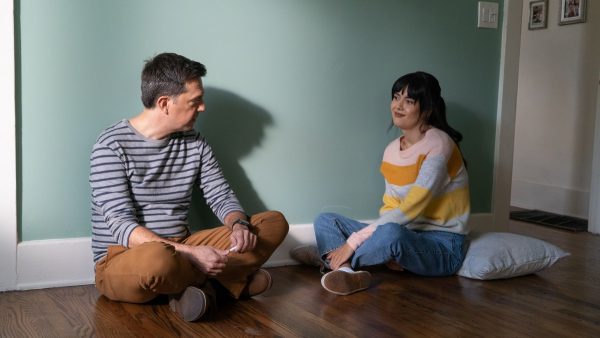 At first, I was nervous and actively rooting against Together Together sliding into something more rom-com, and while Nikole Beckwith’s script never actually does so, it fascinatingly explores the idea of these two, well, “together together” Matt doesn’t have any issue with the 20 year age gap, Anna thinks it would be weird and visibly upsets him by reacting “ew” when a store clerk assumes they are a couple (not to mention goes on a rather hilarious diatribe against Woody Allen), but rather than have these characters argue about it, uses that discussion to wrestle with how tight bonds can become without physical intimacy or romantic expressions. Then there are also the numerous scenes that tackle the uncommon gender dynamic here, such as all of Matt’s parenting books specifically written for single moms because apparently there are none for aspiring single fathers unless they are divorced or widows. In one emotionally hurtful sequence, a baby shower is thrown where Matt’s family and friends are either inconsiderate or unsure how to treat Anna to the point where a sad realization crashes over her.

The premise alone of a genuinely kind man wanting to be a father and nurture a child is unheard of unless it’s being played for crude laughs; here, it’s wholesome and charming. It might not reach the profound heights it seems to be shooting for and abruptly ends (maybe we can get a sequel catching up with these two five or 10 years from now), but Together Together is undeniably funny and good-hearted.