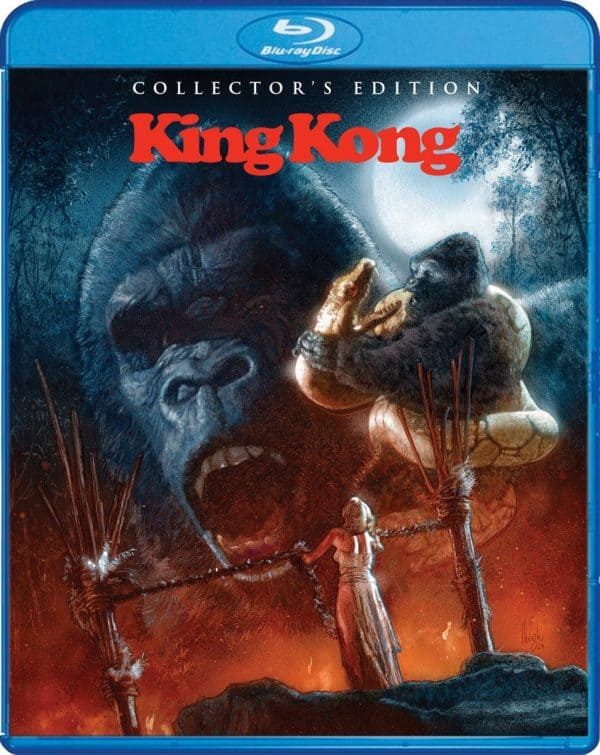 Dino De Laurentiis’s 1976 remake of King Kong tends to be forgotten in favor of Peter Jackson’s 2005 version, but many of us who were kids at the time tend to remember it fondly as the major monster movie of our youth. Shout! Factory seemed to have read our minds when they prepared a new Collector’s Edition of the film, complete with the problematic TV version, a big batch of new interviews, and two commentary tracks.

The output of George Lucas and Steven Spielberg was a huge influence on me as a kid, but the original 1933 King Kong also made a major impact. Part of it was Willis O’Brien’s stop-motion animation, which fascinated me, and part of it was just the story itself: What kid isn’t a sucker for a story about a hidden island that’s home to a giant ape who’s captured and brought back to New York City, where he wreaks havoc?

That interest in the original helped prime my pump for Dino De Laurentiis’ 1976 remake, which was hyped in a major way by Paramount Pictures leading up to its December release that year. Unfortunately, it turned in a lackluster box office performance, and I found myself less than thrilled with the “guy in a suit” approach to the effects.

I had cut my teeth on the Godzilla films too, but I could never get over how hokey it looked to see someone in a suit stomping around on model cities and toy tanks, and that’s where this version of King Kong lost me, especially the part that takes place in New York City. I enjoy the first two acts of the story, with Charles Grodin turning in a great smarmy Petrox Oil company guy who takes to the sea in search of oil on a mysterious island and Jeff Bridges playing an earnest primate paleontologist who sneaks aboard the ship. Jessica Lange, in her film debut, plays Dwan, an aspiring actress who is found adrift at sea after the yacht she was traveling on blew up.

Sure, Dwan’s entrance is a bit random, as if screenwriter Lorenzo Semple was told that this updated version of Fay Wray’s Ann Darrow could not simply be aboard the ship from the beginning as another stowaway or a crew member or something like that. And, yes, the script is a bit flat in spots, although the three leads do their best with the lines they’re given. Let’s face it, though: You don’t watch a King Kong movie for the sparkling dialogue.

However, I’ve always thought that changing the reason for the trip to the island from a moviemaking venture to a quest for oil was a great twist, especially given the oil shortages of the 1970s and the concerns people had about fossil fuels at the time. And using the World Trade Center instead of the Empire State Building was a perfect way to update the film’s final act, especially since it gave two buildings for Kong to defend himself from. For some reason, I’ve also always loved that poster of the giant gorilla astride both buildings, holding a burning helicopter in one hand and the damsel in distress in the other.

I suppose, in the end, this version of King Kong simply pushes my nostalgia buttons, as I’m sure it also does for many Gen Xers who are likely ready to snap up this release. Despite its shortcomings, it’s still a fun way to revisit what now feels like a simpler time for moviegoing. The fact that Shout! Factory’s Scream Factory imprint put a lot of effort into this release shows that they also think it’s going to push those buttons for a lot of people.

There are actually two versions of the movie here: the original theatrical cut, which clocks in at 134 minutes; and the extended TV broadcast cut, which is 195 minutes and is actually presented in two segments, as it was when originally shown on network TV across two nights. Each version occupies one Blu-ray platter, and the bulk of the bonus features are found on the disc with the theatrical cut.

The TV broadcast version is a bit problematic, as Shout! notes ahead of time, since they had to deal with old school 1.33:1 aspect ratio footage (as all TV broadcasts were back then) being added to a widescreen 2.35:1 aspect ratio. They do say that the added footage is from a new 2K scan, but they couldn’t do anything about its sound issues (some of the dialogue seems to be simply missing), and some of the shots were simply of less-than-presentable quality. In addition, anything overly violent or sexual was excised from the film. (Eight-year-old me says, “Boo.”)

The TV executives who commissioned this extended cut seemed to have been more concerned about creating a two-night event than about whether this new version would stand the test of time. To be fair, home video was in its nascent stages back then, so they couldn’t have envisioned where it would end up in the year 2021. I assume Shout! included it here as another nostalgia nod to those of us who remember those days.

The new bonus features commissioned by Shout! Factory are mostly found on the theatrical cut disc. They are:

• Two audio commentaries, one with film historian Ray Morton, author of King Kong: The History of a Movie Icon, and one with well-known makeup special effects guy Rick Baker. The first track is, as you might imagine, like a making-of audiobook, with tons of historical information about the entire Kong franchise and this film itself. It’s a bit dry, but it’s still worth a listen, especially for Kong fans.

The other track is a moderated one that the host says was originally meant to be a video featurette, but he notes that the conversation went so long that the decision was made to turn it into a commentary. As such, it’s not screen-specific, but Baker is always a fun guy to listen to, given his lengthy, rich history in the industry and the fact that even as a kid, he was enthralled with make-up effects. He leads off with an anecdote about making his own Kong costume after seeing the original – he ended up performing the character in the suit in this remake, despite his initial apprehension about the project.

• On Top of the World (12 minutes): Assistant director David McGiffert and production manager Brian Frankish look back on the making of the movie and show off some storyboards in the process.

• When the Monkey Dies, Everybody Cries (14 minutes): I don’t recall ever seeing an interview with movie gofers, so I suppose there’s a first for everything. This interview is with production messengers Jeffrey Chernov and Scott Thaler, who had to bike between 30 sets delivering messages, paychecks, and more back in the pre-cellular and pre-email era. Unsurprisingly, De Laurentiis was a tough boss. I’d like to see more bonus features like this that shine a spotlight on unheralded members of film crews.

• Maybe in Their Wildest Dreams (6 minutes): Sculptor Steve Varner looks back on making the 40-foot-tall Kong that never worked properly, along with the huge Kong hand that was used extensively in the movie. He also touches on his thoughts about Oscar-winning designer Carlo Rambaldi, who also worked on the film and died in 2012.

• Something’s Haywire (6 minutes): Actor Jack O’Hallorhan, who played one of the crewman aboard the Petrox ship, covers a wide variety of subjects, including what he says was director John Guillermin’s stubbornness and developing a friendship with Jessica Lange.

• From Space to Apes (5.5 minutes): This one features photographic effects assistant Barry Nolan, who came to Hollywood from the aerospace industry (hence the name of this interview). He adds to the “the director wasn’t fun to work with” theme, who he nevertheless reunited with for King Kong Lives, which he talks about quite a bit.

• There’s a Fog Bank Out There (6.5 minutes): The last of the interviews is with Bill Kronick, the second unit director. He covers some interesting tidbits, such as his discovery of Lange and insistence that De Laurentiis and Guillermin check out her work, as well as how they did the fog bank shots, the problems they had with the 40-feet-tall robotic Kong, and what went into getting the big ape to fall off the World Trade Center.

Over on the disc containing the TV version of the film, the main attraction is the 68-minute King Kong ’76, a panel discussion from 2016 featuring composer John Barry’s assistant, Richard Kraft, De Laurentiis’s widow Martha, author Ray Morton, actor Jack O’Hallorhan, Rick Baker, and cinematographer Richard H. Kline. It’s a wide-ranging discussion of the film that was assisted by the fact that the participants had just watched a special screening at the Aero Theater in Los Angeles, so their memories had been refreshed a bit.

The second disc also has a collection of intros and commercial bumpers that were used when NBC aired King Kong over two nights in September 1978.