Team17 has announced the release of Worms Rumble, the latest in their beloved series of annelid battler, on Xbox One, Series X/S, Nintendo Switch and the Epic Games Store.  The launch on to these platforms also coincides with the arrival of the brand-new  arena – Spaceport Showdown, which is free on all platforms.  Watch the new trailer for this arena below…. 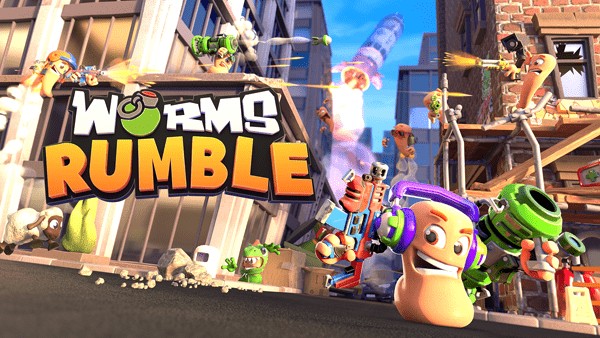 This latest title in Team17’s long-running and hugely beloved Worms franchise is the very first game to include real-time combat and crossplay matchmaking between players on all platforms. Players can prepare for action in frantic 32 player battles where they will get to use a good variety of weapons, including Bazookas, Assault Rifles and the fan-favourite Sheep Launcher and Holy Hand Grenade.

The new Spaceport Showdown Arena features a new, randomly generated, low-gravity mechanic that will slow the action down during battle.  This new Arena also comes with new extra-terrestrial premium skins, banners and emotes.  Xbox Players will be treated to the free exclusive Series Green Hoodie while Switch gamers will be able to enjoy the free Patchwork Bear Outfit.

For those who prefer to get their hands on a physical copy of the game, one will arrive at retailers for all platforms on 13th July.