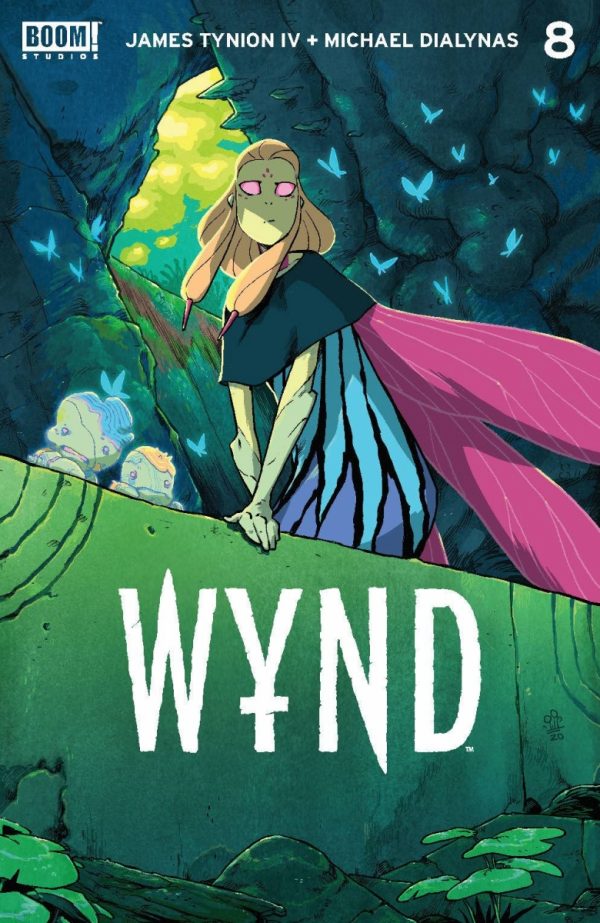 In the beautifully-stylised comic series Wynd from James Tynion IV and Michael Dialynas, we have already been introduced to a wonderfully fleshed out world of fantasy and xenophobia. The series continues to push ridiculously wonderful visuals onto the page while delivering a story at just the right pacing to keep it enjoyable.

The second arc has taken us across the sea where Wynd, Oakley, Thorn and the Prince Yorik have managed to travel to distant shores. The journey has not been without its fair amount of trials and tests, mainly Prince Yorik being an entitled little git. Though drastic measures from the king of Pipetown has led to an alliance with the Vampyres, who are ruthless and will hunt down the Prince, while leaving nobody else alive as witnesses.

Recent events take place as Wynd has left for help and volunteered as a forward scout to get medical aid and an escort from the Faeries. This young man’s back is against the wall as Thorn lies injured and unconscious from injury as the rest of party quickly have to stay ahead of the Vampyres. The action here is ramped up considerably compared to the first arc of the series, where tension is very much linked to the chase and the constant race against time.

In this issue, the safety of the Faerie kingdom appears to be a breath of fresh air for Wynd as the others are brought to the capital for shelter from the Vampyres. Wynd also gets extra insight into the legendary rivalry between the Vampyre and the Faerie, figuring out the humanity somehow inserted themselves into the middle of a war that precedes their species’ existence. The story drop delivers a very nice insight into the history of the world told by others, painting the human element of the story in a better light.

The flip side of the story involves Pipetown and the Queen working in secret to send help to aid the Prince. Her trusted advisor recruits two prisoners to help him, one of whom is Thorn’s father and the other a friend of Wynd and Oakley. The tables turn as they have someone loyal to the throne in their midst and their journey does not appear to be a long one.

I look very much to continuing on with this series as it is fun, refreshing and enjoyable. The danger and violence is real in the issues, but hidden very well amongst the wonderful colours and art style. The characters are all wonderful in their own individual ways, while still managing to bounce off each other for some insightful moments.