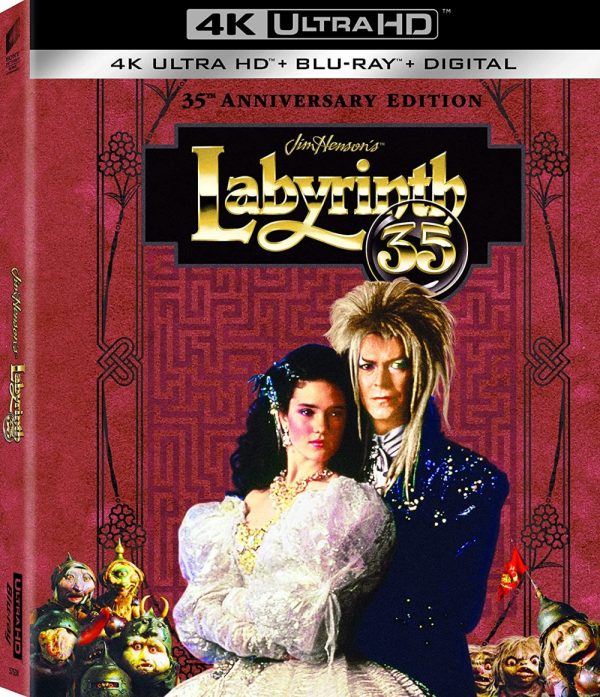 Sixteen-year-old Sarah is given thirteen hours to solve a labyrinth and rescue her baby brother Toby when her wish for him to be taken away is granted by the Goblin King Jareth.

Five years ago, Sony issued a 30th Anniversary Edition of Labyrinth on Blu-ray and 4K UltraHD Blu-ray. They decided to go back to the well for this one so they could release a version of the film that uses Dolby Vision, rather than HDR10.

The version you select should come down to whether you have a preference between the video standards and if you care about the new bonus features included here, as well as the new book-like packaging. Dolby Vision is known as superior to HDR10, although it’s not used as often since it’s a closed standard that requires a licensing fee.

Judging by this new disc, Labyrinth looks as close as possible to what filmgoers saw in theaters in 1986. And, yes, that includes the image softness and prominent film grain – the latter may make some casual fans wonder if there’s something wrong with the video while diehards will likely argue about whether it’s too much. 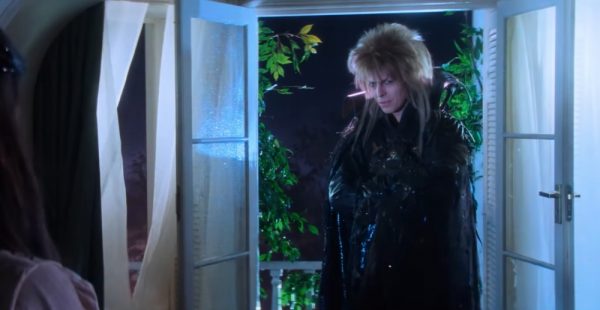 The little details are also part of the experience with a movie like this one, and the 4K version really shines through here. The creatures and environments display stunning clarity, with wisps of hair and fabric textures easy to make out. And while the film’s overall color palette tends to be more muted, the more vibrant hues pop onscreen when they should. Comparing this disc’s image quality to the previous 4K will come down to some serious hair-splitting that will only be of interest to the most diehard home video fans.

Sony housed the discs inside a book, like both of the 30th Anniversary Editions, but the presentation is better here, with a cover that looks like the book in the film – it even has a bit of a faux leather feel to it. The content inside is different too: instead of a making-of piece, this one provides a look inside the Henson archives, showing us excerpts from Henson’s shooting script, complete with his handwritten notes, behind-the-scenes photos, and production drawings. That may give you another reason to double-dip, if you already own the previous release. 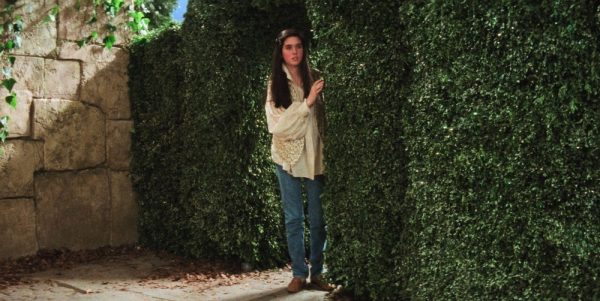 Sony also included the same Blu-ray platter used in the 30th Anniversary Edition and a code for a digital copy. Since they recycled the Blu-ray, the studio put the two new bonus features on the 4K disc, and diehard fans of the film will likely love both of them.

The first is 26 minutes of deleted and alternate scenes, with optional commentary by Jim Henson’s son, Brian. The video quality is poor and the post-production effects are missing (a marker smear indicates where an effect should go, for example), but the footage is still an insightful look into a longer version of the movie. Brian Henson worked on the film and performed the voice of Hoggle, so he has plenty to say about what’s onscreen, but there are moments where he can only guess at what his father was thinking when something was excised.

The other new bonus feature is 55 minutes of screen tests featuring seven actresses who tried out for the role of Sarah, including Molly Ringwald, Claudia Wells, and Tracey Gold. This footage is also not well-preserved, but it’s also a glimpse into what Labyrinth might have been, had someone else been cast in that key part.

Some of the actresses tried out in a room with a casting director and also worked with puppets, which possibly means they moved further along in the process. If that’s the case, then the assumption is that Ringwald, Wells, and Gold weren’t under serious consideration, since they didn’t seem to make it to the puppet stage. In retrospect, that might be why Henson probably wanted someone like Jennifer Connelly, who only had a few small roles under her belt before this movie. A bigger name star might have been seen as competing for the spotlight with David Bowie’s Goblin King.

The rest of the bonus features are found on the Blu-ray and were ported over from the 30th Anniversary Edition. They include a nice batch of making-of material that runs close to two hours and features Jim Henson, Bowie, Connelly, the puppeteers, designer Brian Froud, producer George Lucas, screenwriter Terry Jones, and others. Some of it, like the 57-minute Inside the Labyrinth, was created when the movie was made while others originally showed up on the 2009 Blu-ray.

In terms of commentaries, you get a picture-in-picture feature with folks like Henson family members talking about the movie and a commentary track with Froud. Unsurprisingly, the designer keys into the visuals more than anything else, just like Brian Henson focuses on the puppeteering in his deleted footage commentary. While the effects were done the old-fashioned way, Froud does note that an owl that appears during the opening credits was the first digitally created creature to show up in a movie.

The rest of the bonus stuff was created for the previous release, starting with a 41-minute anniversary Q&A that stars Brian Henson and a few of his fellow puppeteers, with Adam Savage of MythBusters fame moderating the chat. There are also three short remembrance featurettes that look back on the film, Jim Henson’s legacy, and David Bowie.