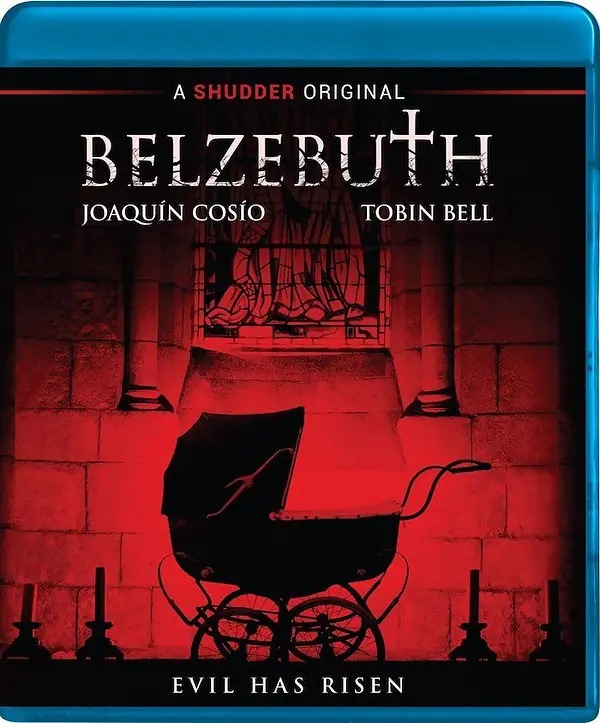 A grieving detective investigates several massacres involving children that all seem to be linked by an excommunicated priest.

Within the first 10 minutes of Mexican supernatural horror Belzebuth there is a brutal murder scene so dark and grim that you cannot believe that the filmmakers went there, mainly because it is so early on in the film but also because this is a Shudder Original movie, a description that – along with Amazon Prime Original and Netflix Original – usually conjures up images of slick, brightly lit and crisp presentations filled with the same drone shots over wide landscapes that all looks rather splendid but tends to sap all of the filmmakers individual styles out of the proceedings, resulting in nice looking movies that are rather flat, uninteresting and lacking the magic touch of their respective director.

It would not be untrue to say that Belzebuth does suffer from some of that but introducing your movie with something so taboo when it comes to what you can show onscreen it does lend the movie a little bit of extra horror cred, and it also lets you know that – potentially – all bets are off now that you’ve seen something you probably weren’t prepared for. Unfortunately Belzebuth never hits the same highs (or lows, depending on your tolerance for such things) again but what you are left with after such a killer(!) opener still has plenty of merit.

And what you are left with is a movie of two distinct halves; the first half of the movie is more of a police procedural as detective Emmanuel Ritter (Joaquin Cosio – Quantum of Solace) and his wife are celebrating the birth of the son. Tragedy strikes, leaving the couple childless and, eventually, making Ritter a widow. Five years later and the still-grieving detective is called to investigate a school shooting where several young children have been massacred and, following more gruesome murders and an investigation from the Vatican, Ritter comes to learn that the killings are connected via an excommunicated priest who has occult symbols tattooed all over his body, and he is now in a race against time to save the one child who may be the key to all of the slayings, and into the possession story of the second half we go.

With a plot borrowed from The Final Conflict: Omen III, plus any of those The Exorcism of… movies you see cluttering up the streaming channels (and one line of dialogue pinched from The Exorcist), Belzebuth packs quite a lot into its unnecessarily lengthy running time but a lot of it is ideas and scenes you have seen before in other movies. However, the film does have two key factors that lend it an air of watchability over the usual run-of-the-mill supernatural plodders, namely Joaquin Cosio and Tobin Bell.

Bell has become as much of a horror icon as Robert Englund or Tony Todd in the past 20 years and his presence is much felt, even in the scenes he isn’t in. He plays Vasilio Canetti, a former priest who has sold his soul, his body a collage of Satanic symbols, and Bell looks fantastic, especially with the long beard he has to wear, and Canetti’s character arc is a fascinating one that doesn’t go too deep but lets you know enough of what he is up to so that he becomes the most interesting character in the whole film. He also has enough of a background that could make an interesting movie in its own right, should anybody feel the need to make this into a franchise.

But as well as Bell, Joaquin Cosio steps up and gives a performance that is as believable as it is sympathetic. The tragedy that happens to Ritter at the beginning of the movie is bad enough but Cosio fills that character with so much depth and beleaguered weariness that you cannot help but be on his side so that when Ritter becomes the target for the evil in the second half of the movie you cannot help but root for him to get through it, and Cosio is never less than totally convincing as the suffering everyman against Canetti’s elevated persona.

Had it had another pass through the writer’s room to smooth out the rough edges and make the plot details a little less confusing in certain places, Belzebuth would be a occult/supernatural horror movie comparable with some of the bigger movies of a similar vein from the past two decades but with a lot of ideas – possibly too many for one movie – bubbling away in a dialogue-heavy script and a some truly awful CGI in the second half (note to filmmakers and studios – CGI blood may be cheaper and less messy but it looks terrible and takes you right out of what should have been some truly grisly kill scenes, thus ruining your movie) Belzebuth falls into the trap of the *insert streaming channel of choice* Original movie by cutting corners in all the wrong places to try and make a wider-audience friendly horror movie and therefore blunting its impact. That said, if possession movies are your thing and you crave something dark and nasty then you’ll get it thanks to that opening scene, and with a few neat core ideas and two dependably solid actors to carry it along Belzebuth is worth a watch as it does at least have ambition to be greater than the sum of its individual parts. It is just a shame it never quite gets there as Belzebuth has the potential to be something exceptional rather than merely being a good but flawed horror movie.