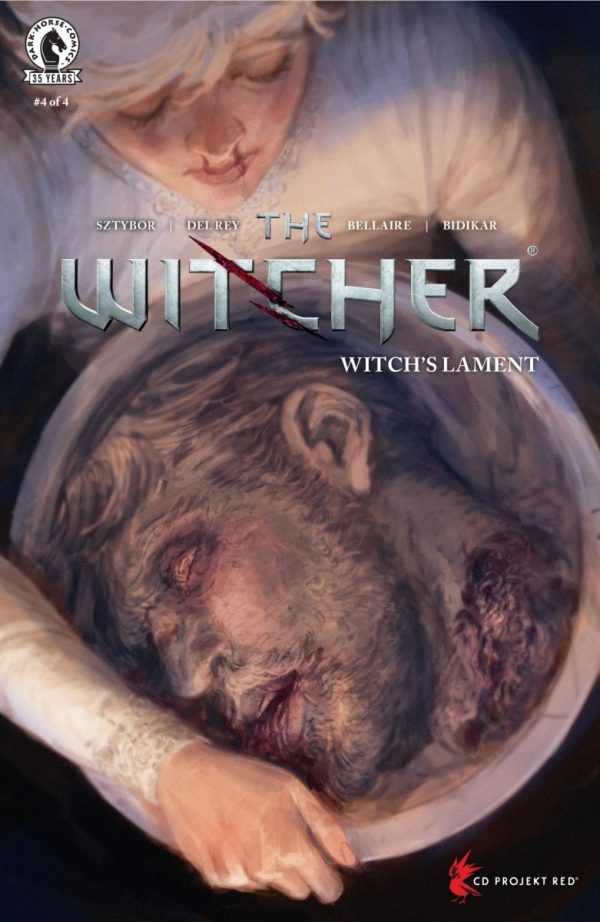 Geralt’s time within Witch’s Lament is coming to a close, and the series has seen the Witcher cast doubt on past decisions while compartmentalising and then moving on with his next job, the whole time not entirely sure if he can move past the apparent regret facing him from the series’ opening panels.

Issue #3 ended with some revelations about the seedy dark secrets going on within Lord Potrim’s house, only to find the man a victim of his own wrongdoings. Now, in this series finale, our Witcher has found himself thrown into a family dispute, with some supernatural overtones and a fickle mess that he only seems to thrive within.

The final issue certainly sees some revelations. Giltine is merely a vessel for revenge, but Geralt cannot stand the puppetry at hand and must find a way to break the possession and find a way for the girl to be free of the burden and guilt. The shining moment is when Geralt leaps into action and proves that there are very few people who can best him in combat, then regrets that he accidentally saved a man’s life who really should have been killed.

The Witcher: Witch’s Lament #4 is a wonderful end to this series, giving us closure to this story arc, allowing Geralt to tie everything up in a nice bow and before grabbing Roach and heading off to the next adventure. It’s been a tad strange on the artwork front, opting for a different style to many of the Witcher comics in recent years. This certainly leans more into a dark fairy tale, which brings up feelings of Brothers Grimm tales, while giving some extremely beautiful visuals that don’t have to be photorealistic or overly detailed. I have loved how every image appears to have started on a black background and using colour to discern light, rather than everything is white and creating an atmosphere from there. The colours have certainly done wonders to create the darker and more menacing tone, which has complemented the writing wonderfully.

I am extremely biased towards the writing of Bartosz Sztybor; his runs on The Witcher and Cyberpunk stories have been an exacting and exhilarating journey of storytelling prowess. The familiar worlds have been giving exceptional new depths and dimensions past what we have already come to understand. This final issue of Witch’s Lament has certainly seen Geralt plan, adapt and manoeuvre to the situation at hand while never once losing his cool, which keeps in touch with the Witcher’s stripped emotional pallet.

I have loved this series, abd reading the entire arc over again has been wonderful, allowing appreciation and enjoyment for this latest Witcher tale.