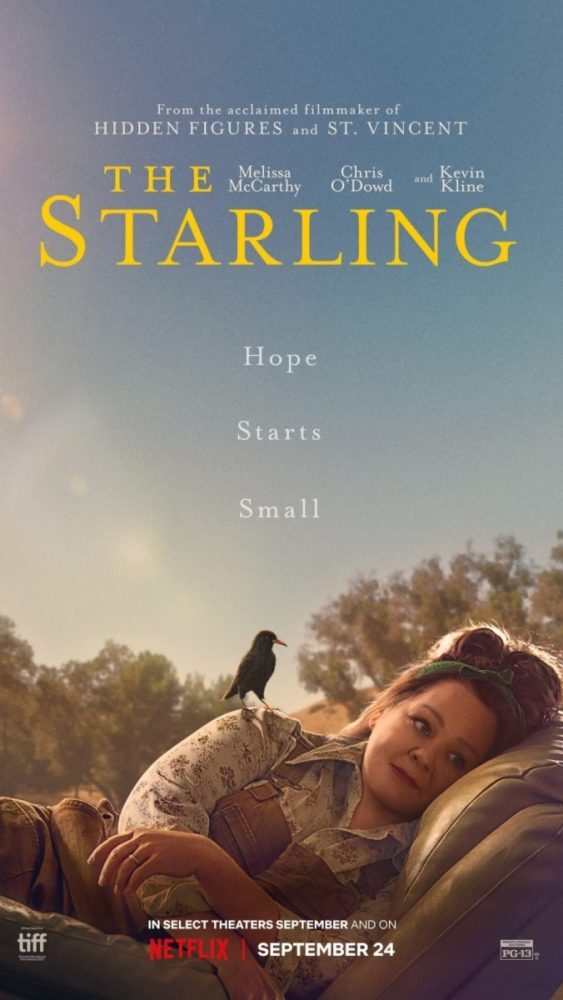 A woman adjusting to life after a loss contends with a feisty bird that’s taken over her garden – and a husband who’s struggling to find a way forward. 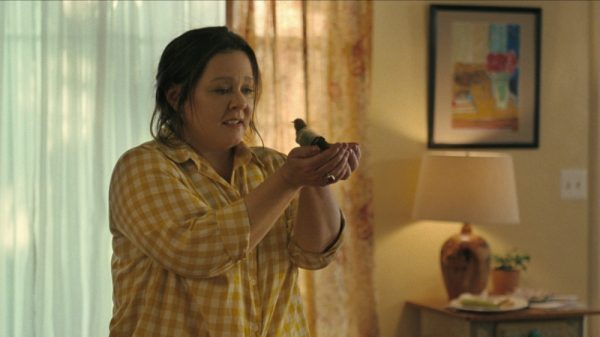 Few will argue that director Theodore Melfi’s (St. Vincent, Hidden Figures) heart isn’t in the right place with his new drama The Starling, though heavy-handed choices across the board unintentionally undermine the committed work of the talented ensemble cast.

It’s been a year since Lilly (Melissa McCarthy) and Jack (Chris O’Dowd) lost their infant daughter to SIDS. A suicide attempt leaves Jack recuperating in a psychiatric facility while Lilly works a retail job and makes weekly visits to him.

Lilly is also encouraged to meet with therapist-turned-vet Larry (Kevin Kline), who despite his initial reluctance to treat a human being for the first time in years, soon enough becomes a vital pillar of support in Lilly’s life. This is all while Lilly has to deal with a most peculiar disturbance at home – a starling which routinely pesters her in her lush garden.

Somewhere within Melfi’s film is a simple drama about people communicating in order to get over their consuming grief, and understanding that coping with a loved one’s death isn’t a binary choice between forgetting them or languishing in the spaces they’ve left empty. 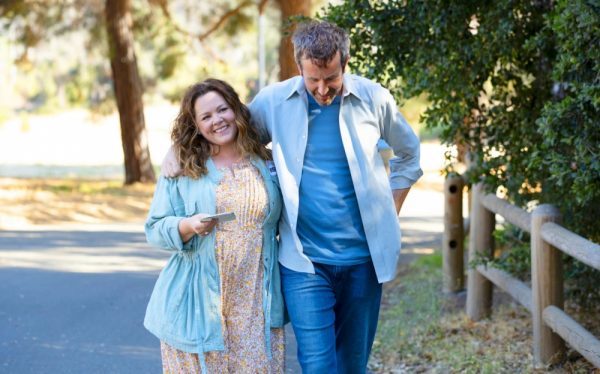 But it isn’t long before this promising throughline is saddled with the less-persuasive presence of a CGI bird. Anchoring an otherwise entirely tactile drama around a digital animal is risky at the best of times, and even beyond the bird’s so-so visual fidelity, it serves as a rather lunk-headed metaphor for both lingering grief and marital discord. Watching Lilly battle the starling while wearing an American football helmet and taking occasional pratfalls, it feels like we’ve accidentally loaded up one of Melissa McCarthy’s broader comedy romps.

This iffy subplot undermines the more quiet, haunting moments of Melfi’s film; Lilly’s long, lingering looks at her daughter’s empty bedroom, or finding her little sock down the back of a chair. Other hackneyed embellishments abound, though, such as a mildly ridiculous moment where Lilly daydreams of better times while driving and almost skids off the road. It feels pat and low-effort; tellingly this is the only one of Melfi’s four films which he didn’t also write.

But even Melfi’s own filmmaking style feels obtrusive to the more compelling character drama; obvious, inspirational needle-drops make overzealous attempts to prize tears from the audience’s eyes, and an overwrought original score from the talented Benjamin Wallfisch most often has the opposite effect of its intent.

It’s all deeply frustrating, because McCarthy provides further proof here that she’s so much more than her broad comedies would imply, and it’s a real shame this vehicle doesn’t give her more to work with. She gives herself over entirely to this portrait of a woman trying to keep home and hearth from falling apart, though isn’t lent an opportunity to go deeper per the script’s slushy affectations. 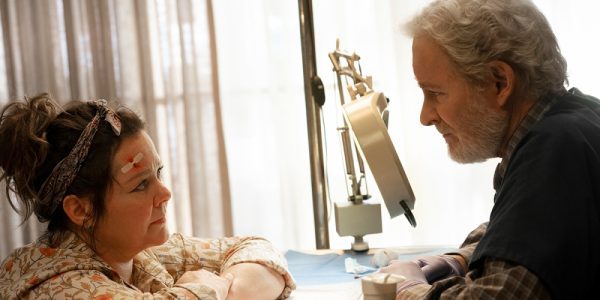 Chris O’Dowd is also quite fantastic as her dryly sarcastic husband, his flattened affect providing a stark contrast to his more gregarious typical comedy persona – though he still nails an out-of-nowhere Borat impression when the time calls for it. His Jack is a concerning, believable depiction of a man whose vibrant edges have been planed away by despair.

Completing the focal triumvirate is the ever-welcome Kevin Kline, whose no-nonsense demeanour provides a welcome ballast to the more gooey sentiment unfolding around him. Despite his refusal to take anyone’s shit, Kline’s Larry brings an infectious warmth to the fore, with the actor energising the film every time he’s on-screen – which is thankfully quite a lot.

Sadly the rest of the supporting cast is largely wasted in small, insignificant roles; Timothy Olyphant is absurdly underused as Lilly’s chirpy boss, Skyler Gisondo barely gets a chance to make a dent as one of her co-workers, and Daveed Diggs appears for a few scattered minutes as an orderly-slash-art teacher at the psychiatric clinic.

There’s clearly merit to the film’s exploration of grief, but bogged down as it is by both the encumbering bird subplot and its more shameless stylistic indulgences, this is a case where less would’ve most certainly been more.