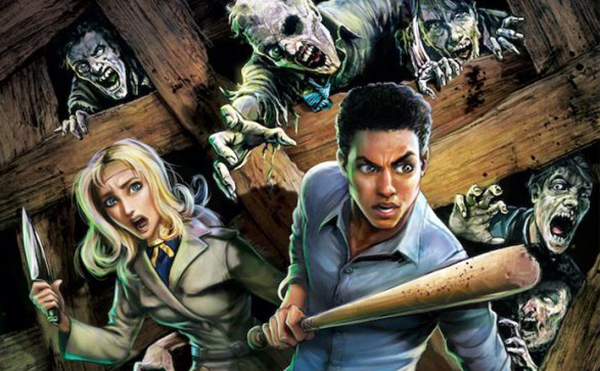 The Night of the Living Dead is such a significant piece of movie history not just for creating the zombie genre, but for the way it was filmed and the focus on the horrific experiences the characters go through rather than the pulse-pounding action the genre is known for now. The film has been remade or reimagined a few times, not to mention how it has influenced many other horror films, with the latest being Night of the Animated Dead, an animated remake which follows the same story but includes a few elements the original either didn’t have or could not do at the time.

We spoke with The Mandalorian actress Katee Sackhoff who voices Judy in the film. Unlike many of Sackhoff’s previous roles, Judy is a soft-spoken woman who doesn’t always place herself in the action, but still wants to help defend the farmhouse the survivors are trapped in any way she can. We chatted about playing against her usual character type, her plans for a zombie apocalypse, her recent role as Batman villain Poison Ivy in the two-part Batman: The Long Halloween film adaptation and the near-20-year legacy of Battlestar Galactica, where she portrayed her breakout role as ace pilot Kara Thrace aka Starbuck. Check out the interview below… 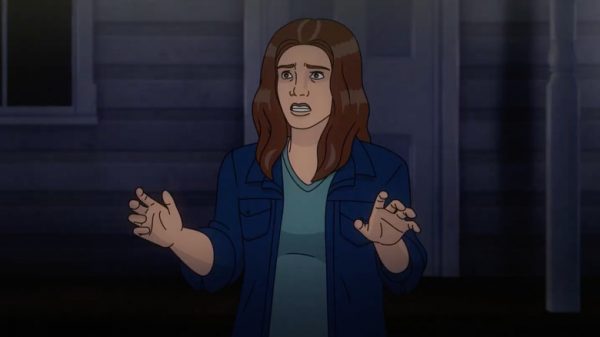 Ricky Church: Night of the Living Dead has such a groundbreaking legacy to it. Why do you think it is so loved and how does Animated Dead set it apart from other remakes or re-imaginings?

Katee Sackhoff: When you create something that hasn’t been seen before, it’s going to be adored for years to come. I think that this is no different. It’s a very clear start to something that has been beloved in our genre films for many years. I think it makes complete sense and redoing this as a live-action would not have worked. There’s no reason to, you know? So I think making the film animated allows us to pay respects, but give it a go in a different way.

You play Judy in the movie. It’s funny because so many of your roles are always loud and energetic, but as Judy you’re really subdued. What was it like for you to play a more soft-spoken character?

Yeah. Well, it’s so much fun. I think that this industry, for better or worse, when you do something very well they decide that that’s what you can do. I think they forget sometimes that we’re actors and it’s always nice to be able to mix it up a bit. You know, one of the reasons I started doing voiceover work many years ago was largely because I could play characters that I would never be given the opportunity to take a stab at, no pun intended, in live-action. I think that this is just more of that, you know. I had worked with Michael Luisi [producer] before and so I knew him as a producer. When he called to ask me to do this of course the answer was yes. 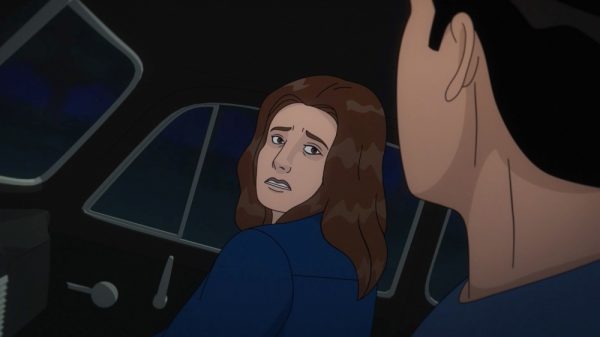 And what was it about Judy in particular that attracted you to that role?

Cool. Now Night of the Animated Dead focuses on a lot of different themes like survival, trauma and morality. What was it that attracted you to the story the most of those themes or were there any other things you wanted to explore?

I love to see what people do when their back is against the wall. I love to see what they do in those moments when they’re trying to survive. I also love to toy with humanity’s question of trust, you know, and what you would do to survive. I think that those are all really interesting questions that we all wonder all the time. For all of those reasons, this film sort of has it all there. 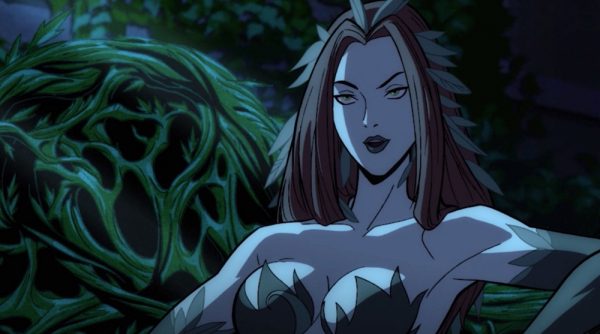 For sure. Now you mentioned that you really like playing voiceover roles. Recently you played Poison Ivy in the Batman: The Long Halloween movies, which I thought was really cool. They also recently announced a 10th year re-release for Batman: Year One, which you played Detective Sarah Essen in. What was it about playing Poison Ivy in The Long Halloween and Sarah in Year One that you really enjoyed about those DC characters or world?

You know, listen, I’m such a huge fan of DC. I grew up sort of losing myself in these stories and the women are no different. When I was growing up, there weren’t a lot of strong women in live-action to emulate and to sort of fantasize about so I turned to animation and comic books a lot. To get to play characters like Sarah and Poison Ivy is just really cool! It just stretches you as a performer and gives you the opportunity to try something different that you wouldn’t necessarily get the opportunity for in live-action. Maybe not Sarah, but Poison Ivy for sure. That is a character that is so interesting to me because she is the epitome of complicated and I love that.

Yeah. Awesome. Poison Ivy is one of my favorite Batman villains and I thought you did a great job with her.

Oh, thank you so much! You know, I think people are so used to seeing Ivy be vindictive and crazy and seductive. I don’t think that we get the opportunity a lot to see Ivy’s insecurities and her vulnerabilities. I think in this instance what was so beautiful about it was that we got to see what she wanted because you can’t for one second think that creation she made inside of Bruce’s mind was not something that she had fantasized about. That’s why it was created. It was why it was so easy for her to create it. That makes her sad! It’s so sad. You hold on to things like that and it makes a character so much more layered. 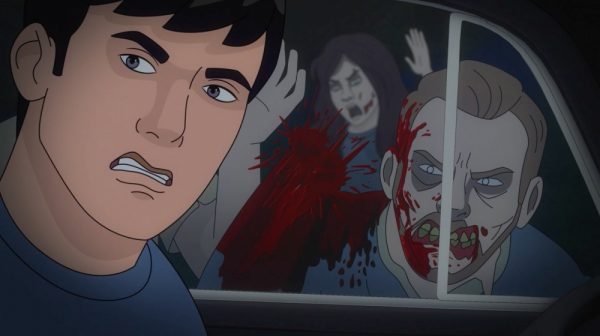 Yeah, definitely. Switching it back to Animated Dead, the zombie genre is so big, there are so many different takes on zombies and stuff. What do you like most about the zombie genre and what do you think your survival tactics would be in a zombie apocalypse?

I think that the reason why we love this so much, this character type so much, is that there’s a question we all wonder if this really could happen. I mean, human beings aren’t being turned into aliens that look completely different. They still look like human beings. I mean, that’s what’s so crazy about it! I think that there is an element of it that people are like ‘fuck man, you should be prepared just in case.’ Like we don’t know. We don’t know. I mean, we’re one pandemic away, man! (Laughs) So you just don’t know, right? I think that’s what the fascination is.

For me in the zombie apocalypse, I’m a big fan of my Swiss Army knife. I think that’s really important. I would have that. I also don’t know what I would take with me because we know we’ve got to cut the head off, right? You think, right? I mean, all zombies are different. I don’t know what I would take. I really don’t know because it would have to be light because you’re going to be walking forever. You’re going to need a hose because you’re going to need to siphon gasoline to be able to go as far as you can or find some car that somebody has completely ramped up that works on solar panels. I don’t know, right. I mean, it’s not like I obviously have never thought about this, right? (Laughs) But I don’t know. I would have to figure out some sort of rigging system to put my dog kennel somewhere. Whether I take my motorcycle or not they’re coming with me! I’m not leaving them for the zombies. That’s just fucking mean!

Excuse my language, that’s two swear words for you! I apologize.

You could always say fraking instead!

I could! I could. It doesn’t roll off the tongue the same way anymore though. It’s been too many years. 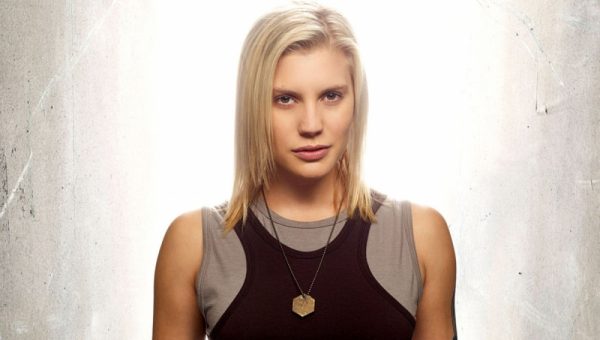 Speaking of that, I am a big Battlestar Galactica  fan. I loved you as Starbuck. Battlestar is going to be turning 20 in a couple of years and I always like it when I see photos of the cast together and you guys keeping up. What was it about Battlestar you cherish most about playing Starbuck or starring in it?

So much! There’s so much about that character, those people, that story, everything that means the world to me. Battlestar was like my fourth series I’d been working. I had been playing very stereotypical blonde roles up until that point. I knew that if I could book Starbuck, my career would change and it became this thing that I fixated on and every time they said no to me, I solicited them to see me again and I changed my performance and I just kept going and going and going. Ultimately, thank God, I got the part because it did change my career. All of a sudden I wasn’t the ditzy blonde girl from this show. I was all of a sudden this tough girl that could take care of herself and was one of the boys. All of a sudden my career changed. That is a huge thing that I think of so fondly about. That cast is a family. We’re together all the time and when we’re not we’re talking or texting or something. It was just a very, very important show and a very timely show. It was very topical and it’s still relevant which is crazy.

Thank you very much to Katee Sakhoff for speaking with us!

Night of the Animated Dead is available on digital now and will be released on Blu-ray October 5th.