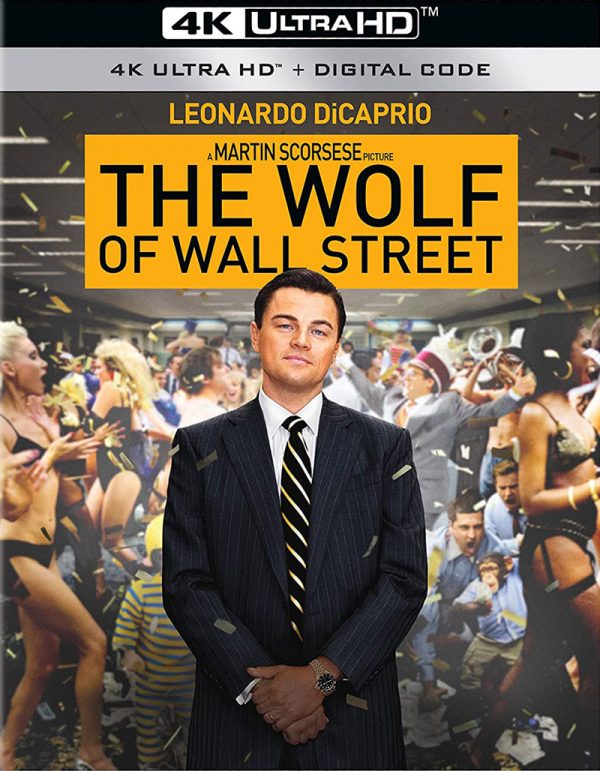 The Wolf of Wall Street arrives on 4K with a transfer supervised by director Martin Scorsese. Nothing new was added to the bonus features, but my understanding is that two featurettes that were only available in some non-U.S. editions were added to this one for the U.S. release. A code for a digital copy is included too.

It’s easy to look at The Wolf of Wall Street as GoodFellas set in the financial world, and to a certain extent it has a similar feel, especially with regard to the main character’s voice-over. However, this movie has a more heightened sense of black comedy, a feeling that you should be laughing at these characters, not with them.

Of course, any movie that takes such an approach runs the risk of glorifying what it depicts, and that’s the fine line The Wolf of Wall Street walks. It stars Leonardo DiCaprio as Jordan Belfort, a real guy who made millions of dollars running “pump and dump” schemes in which his brokers talked people into buying nearly worthless stocks that plummeted in value after his company sold its shares

Belfort enlists a group of ne’er-do-wells in his scheme, including his neighbor Donnie (Jonah Hill) and some of his friends, and begins teaching the hard sell technique that will get people to buy stock. He calls his firm Stratton Oakmont, to give it a veneer of respectability, and his office is the epitome of the “work hard, party even harder” ethic, complete with booze- and drug-fueled parties involving hookers.

It’s impossible to conduct business that way and not attract the eyes of the law, of course, and soon the Securities and Exchange Commission (SEC) and the FBI come knocking. I don’t think I’m spoiling anything when I say that this story isn’t complete without some comeuppance for the main character. Some have argued that Belfort’s victims don’t get enough attention, but if you’re a caring, decent person, I think you’ll come away from this film feeling awful about their treatment. 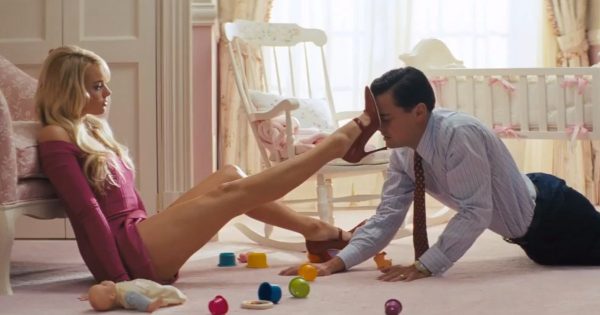 However, if you’re a different type of person, you may come away rooting for guys like Belfort to make even more money and never get punished for their misdeeds. This is like the people who cheered on Archie Bunker on All in the Family or laughed with Andrew Dice Clay’s misogynistic jokes, not realizing that the joke was really on them.

I don’t think it’s Martin Scorsese’s job to ensure people don’t think highly of Belfort, just like it wasn’t his job to make sure people didn’t come away from GoodFellas thinking that being in the mob was a lot of fun. I suppose the difference is that mobsters know without a doubt that what they’re doing is morally wrong, whereas guys like Belfort will still rationalize their misdeeds, and that’s what makes it easier for some people to admire a shady stockbroker.

And to be clear, the film ends by showing us that Belfort is still looking for ways to take advantage of people, only now he’s a motivational speaker who plays off his notoriety to teach people how to be great at sales. He’ll always be a wolf.

This is the film’s first spin on 4K, and Paramount has done a great job with this edition, which features a transfer supervised and approved by Scorsese. While this isn’t the kind of movie that will show off everything a 4K system can do, The Wolf of Wall Street still benefits from a wider color palette and better depth in the details compared to a 2K Blu-ray disc. Bright colors pop off he screen, and clothing, furniture, and faces all display better details. It’s hard to imagine the movie looking much better than this (or even needing to).