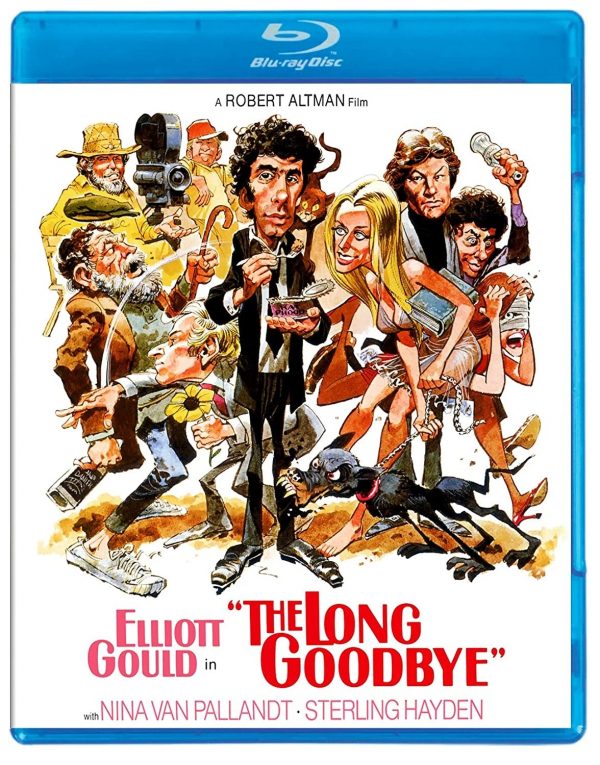 Robert Altman brought his maverick filmmaking sensibilities to a staid property in his adaptation of Raymond Chandler’s The Long Goodbye, using Elliott Gould to turn hardboiled detective Philip Marlowe into a droll character. Kino Lorber commissioned a new 4K master of the film for this Blu-ray, along with a big batch of bonus features.

The Long Goodbye may be based on a Raymond Chandler novel, but don’t put this new Blu-ray from Kino Lorber in your player expecting a movie in the old school hardboiled style. This is a Robert Altman movie, after all, so this is his one of Philip Marlowe’s adventures as filtered through the director’s droll lens.

Elliott Gould plays the title role and ex-baseball player Jim Bouton takes on the small part of Terry Lennox, which nonetheless figures prominently in the plot. Terry asks Marlowe to give him a ride to Tijuana and the detective returns home only to be questioned by a pair of police detectives who say that Terry murdered his wife, Sylvia.

The police later say that Terry committed suicide in Mexico, so Marlowe seems to be off the hook, but when a woman named Eileen Wade hires him to find her missing novelist husband and the detective realizes there’s a connection between the Lennoxes and the Wades, he begins to suspect there’s more going on than the official police story.

Gould would be an odd choice for Marlowe in a more conventional adaptation, but here he’s playing the famous detective as interpreted by Altman, courtesy of a screenplay by Leigh Brackett. (If her name sounds familiar, that’s because she wrote the initial draft of The Empire Strikes Back.) As such, Gould’s Marlowe seems indifferent to everything around him, whether it’s the naked young women who sun themselves outside the apartment near his or it’s Roger Wades’ destructive, alcohol-fueled tirades.

The rest of the cast plays their roles the same way, even Mark Rydell as the gangster Marty Augustine, who at one point demands that his goons all strip down to their skivvies to demonstrate their transparency. It’s an absurd moment, but it’s one that Altman fans will go right along with.

Kino Lorber commissioned a new 4K remaster of the film, giving The Long Goodbye a restoration to the way it looked when it was originally released in 1973. The only issue I noticed was a white spot that appeared near the top of the screen and stayed there for several minutes.

Kino also commissioned a nice batch of bonus features. Many of them were obviously ported over from past releases, but I believe the commentary track is new. I’m not sure what else is new, in the sense that it hasn’t been available on home video before. Here’s the rundown:

A 1973 American Cinematographer article is included as a text piece that you can page through with your remote. It’s a shame that Kino didn’t put it in a physical booklet, but they don’t usually do that, unfortunately.

Radio and TV commercials, along with a pair of trailers, round out the disc.