Paramount has released the first teaser trailer for the next Star Trek series, Star Trek: Strange New Worlds. Watch it below… 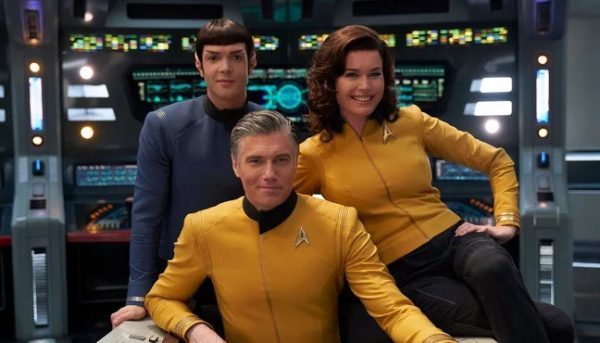 Star Trek: Strange New Worlds is a prequel to the original Star Trek series that will detail the missions of the USS Enterprise’s original crew under Captain Christopher Pike. Anson Mount will reprise his Star Trek: Discovery role as Pike alongside Ethan Peck as Spock and Rebecca Romijn as Number One, whose real name was revealed to be Una Chin-Riley.

Fans of Star Trek will know that Pike, who was played by Jeffrey Hunter meant to be the original lead character before the cast and characters were shuffled and William Shatner was brought in as Kirk, suffered a horrible injury which left him immobilized and unable to speak. His only appearance was in the original pilot for Star Trek which was then structured into the two-part episode ‘The Menagerie’.

During the second season of Star Trek: Discovery, Mount’s Pike became aware of the future awaiting him, but decided to let it come anyway in order to help the Discovery. We’ll have to see how and if Strange New Worlds will lead to Pike’s eventual fate being explored. Star Trek: Strange New Worlds will premiere on Paramount+ on May 5th.