Follows two best friends on their final night together, with a nightmare of drugs, bugs, and horrific intimacy. 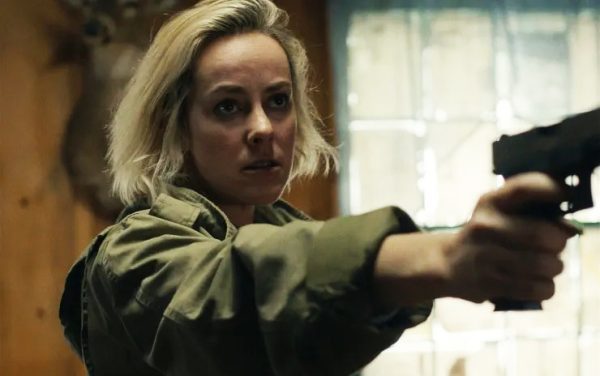 Carter Smith’s (The Ruins, Jamie Marks Is Dead) third film Swallowed is difficult-to-categorise in a most exciting way and, honestly, it might be best for open-minded audiences to just witness it for themselves, as free of outside influences as possible.

If you’re still with me, though, Smith presents a singular take on the body horror genre filtered through a distinct, deeply felt LGBTQ+ prism. Its unwieldy, unpredictable, genre-fusing narrative won’t be for all tastes, but those prepared to follow Smith and his game cast down this gooey rabbit-hole will be rewarded with a highly original effort.

Ben (Cooper Koch) is a young man imminently moving to Los Angeles in the hope of becoming a porn star, and in order to send him off with a fat wad of cash, his pal Dom (Jose Colon) has arranged for the pair to transport some high-priced drugs across the border at the behest of trafficker Alice (Jena Malone). Typically, Dom and Ben have to ingest the drugs in order to conceal them from border agents, yet as it turns out, the drugs aren’t quite what either expected, and retrieving them on the other end won’t be quite so simple. If Swallowed seemingly begins as a relatively familiar drug run-gone-wrong film, it isn’t long before Smith totally upends our expectations of such a story, braced between both a disturbing body horror aspect and a pointedly queer perspective. Without giving too much away, the things in Dom and Ben’s stomachs soon enough begin causing intense digestive distress, as has squirm-inducing consequences on-screen.

There’s also a clear desire on Smith’s part to display the naked male body in unexpected ways throughout; full-frontal nudity abounds frequently, both in horrifyingly distressed and beautiful ways, yet never for a gay-panicked laugh as it so often is in Hollywood. And then there’s the prominent queer overcurrent; it’s made clear early on that Dom has feelings for the departing Ben, while Alice’s drug kingpin boss Rich is a kooky middle-aged man played with theatrical relish by the great Mark Patton (of A Nightmare on Elm Street 2: Freddy’s Revenge fame).

This all adds up to a consistently off-kilter work that eschews much of overt supernatural horror in favour of something far more grounded and plausible. The climax feels perhaps a tad over-extended once its point has been made, but that does little to undermine a bold and fearless entry into a subgenre often fetishistically preoccupied with grisly destruction above all else. The cast also deserves major credit for bringing Smith’s tricksy vision to fruition; newcomers Cooper Koch and Jose Colon (who has no other credits to his name) are easily likeable as our two digestively embattled leads, and it doesn’t take much audience effort to fully get behind their increasingly grim struggle to survive. The ever-great Jena Malone is also perfectly cast as the surly trafficker whose characterisation proves more complex than it initially seems, and again, Mark Patton is clearly having a blast playing the skin-crawlingly creepy, drug-huffing kingpin (or queenpin?) Rich. His free-wheeling performance lands on just the right side of camp without undermining the “seriousness” of the piece.

Technicals are also rock solid; Smith has chosen to shoot the film in a boxy 4:3 aspect ratio which emphasises the protagonists’ confinement, while Christopher Bear’s pulsing synth score ties the visuals together with aplomb. Continually disarming in its undulating unpredictability, Swallowed offers up a fresh take on body horror which considers human fragility from a most uncommon perspective.