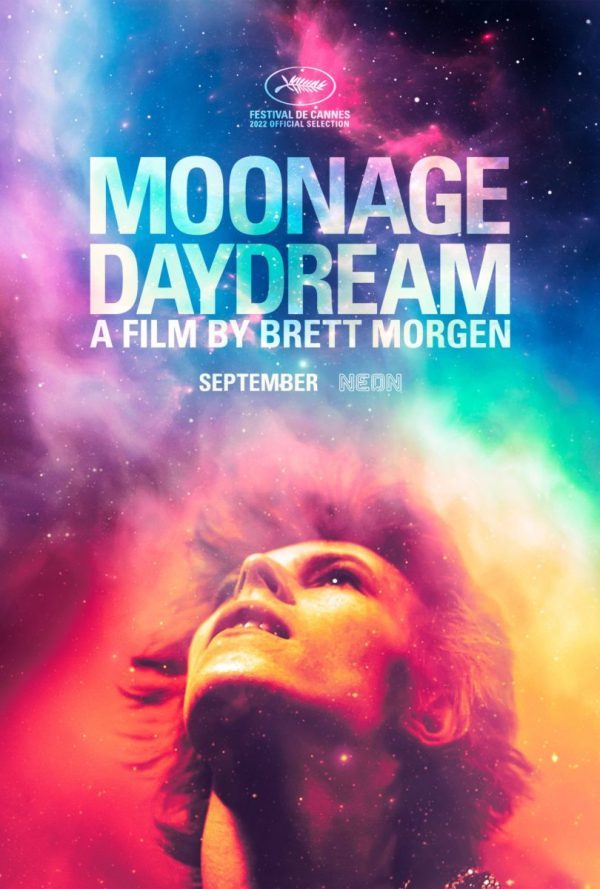 During one of the more playful archival interviews, taking place amid a move to Los Angeles, legendary pop-rock sensation David Bowie is asked something to the effect of “what is it like absorbing American culture.” Quickly responding, Bowie likens it to the fly buzzing inside a drink; it’s like drowning in knowledge and new experiences.

Director Brett Morgen’s Moonage Daydream (marking the third musical documentary for the filmmaker, having previously focused on Kurt Cobain with the incredible Montage of Heck and The Rolling Stones) could be described similarly in that one is pleasantly overflowing in all things David Bowie. However, this is no conventional documentary but rather an audio/visual experience fixated on capturing and maintaining a vibe and recontextualizing/evolving itself as David Bowie does throughout his 50+ year career as a musician. Dozens of beloved tunes have been remastered alongside enhanced and electrifying concert footage, which would alone make Moonage Daydream worthy of IMAX viewings. But this unforgettably hypnotic experience aims higher, telling an odyssey of self-discovery across decades of life. It’s existential and philosophical while tapping into David Bowie’s many personalities and re-inventions of individuality across many artistic talents, ranging from singing/songwriting to sculptures and paintings and acting (in films and on Broadway).

And while there is an endless barrage of splashy colors and transfixing footage carefully selected to play in synchronization with the songs and musings of Bowie, beauty also comes from the storytelling structure and seamless editing. It’s unfathomable even to begin contemplating how Brett Morgen constructed this, but whether the accompanying visuals are concert footage, interview snippets (and by the way, there are so many wonderfully enlightening and inspiring messages here that truly stand tall once the journey is over), cinematic clips (and not just exclusively from David Bowie’s acting career), stage performances, or riveting reveals of David Bowie’s art (there’s a moving sequence discussing vulnerability about the work and never having the courage to fully go through with allowing art galleries to show them off, with Brett Morgen subsequently showing us the gorgeous paintings), it’s all telling a story, asking the questions, and eventually leading to a soul-stirring awakening for appreciation of life and living in the moment. Moonage Daydream covers David Bowie’s antisocial behavior, stubbornness to create music for the masses (until eventually expressing a desire to do so), a touching relationship with a half-brother who shared new cultural tastes but would then go on to be diagnosed with schizophrenia subsequently leading to a rabbit hole dive into Bowie unpacking his own emotions (or lack thereof) and state of mind, and all-encompassing ponderings on the meaning of life.

It also happens to be the first David Bowie documentary sanctioned by the state, which comes with one or two minor setbacks (particularly a disinterest in exploring darker aspects of Bowie’s life).  Needless to say, the amount of access here makes it beyond worth it. Nevertheless, each recognizable classic song is thematically paired with whatever film happens to be touching on, typically yielding potent results that reshape interpretations of rather elusive lyrics. This rewardingly overwhelming documentary is a perfect marriage of subject and form. There is so much to extract from Moonage Daydream that one viewing is hardly enough, but considering it’s also a spectacular treat (especially in IMAX), it gives more reasons to watch it again. It’s a film that succeeds in laying out the world as its subject saw it, enrapturing one in the mind and profound thought processes of David Bowie.

Much will be set about how visually captivating Moonage Daydream is, and deservedly so, but one also comes away with a new outlook on life, which might be the highest compliment to pay a film.