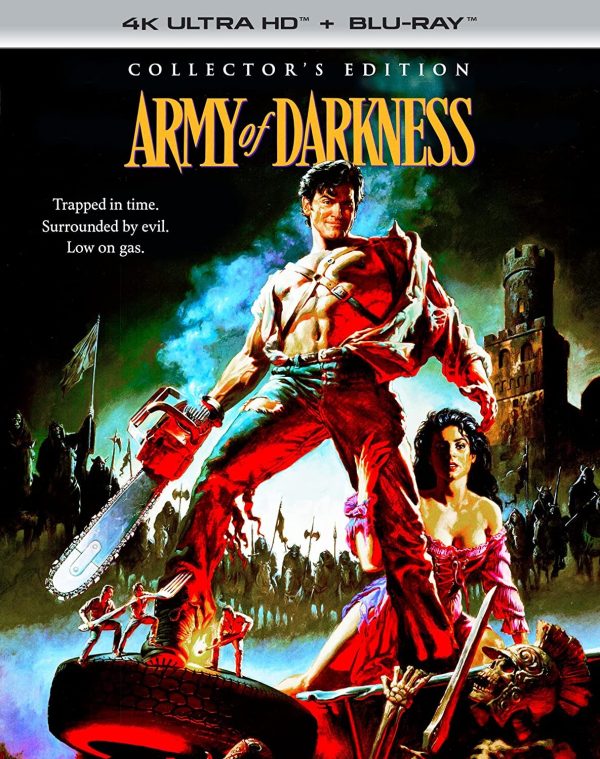 Sam Raimi’s cult classic Army of Darkness arrives on 4K Ultra HD looking better than ever, along with three Blu-ray platters containing the three versions of the film. (Only the theatrical version is on 4K.) Shout! Factory ported over all of the excellent bonus features from their previous edition of the film. 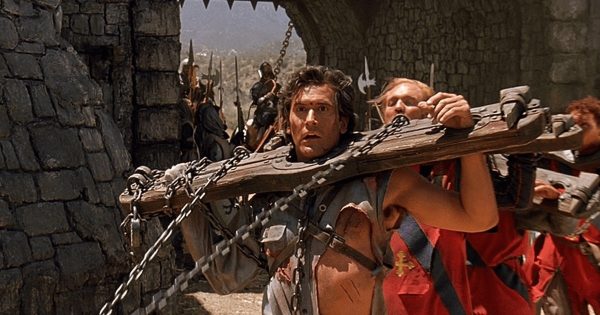 Shout! Factory’s Scream Factory imprint previously released Army of Darkness in a three-disc Blu-ray edition featuring the theatrical, director’s, and international cuts of the film, and now they’ve upgraded the theatrical version in 4K based on a new 4K scan approved by director Sam Raimi, director of photography Bill Pope, and editor Bob Murawski. The director’s cut doesn’t seem to have had any work to it, although the International cut features a 4K scan from the interpositive.

Got all that? If you’re a long-time fan of the film, I’m sure you could easily follow all of that. If you’re like me, though, and only had a passing acquaintance with Army of Darkness until now, let me lay out the specifics of this four-disc set: 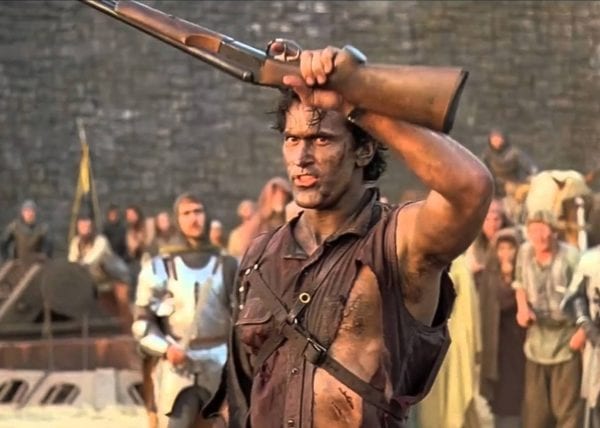 Disc one is the only 4KUHD platter in the set. It has a glorious new 4K version of the film’s theatrical cut from 1992. The only bonus item is the theatrical trailer.

Disc two is a Blu-ray of the theatrical cut based on the same new 4K scan as the 4KUHD disc. It has a bunch of bonus features too. (More on that in a moment.)

Disc three is a Blu-ray with the director’s cut, while disc four is a Blu-ray of the international cut; both platters serve up extras too. As mentioned above, the latter features a 4K scan from the interpositive. There’s been some grousing online about why only the theatrical version is on a 4K disc, but, as they say, that was decided by folks well above my pay grade. 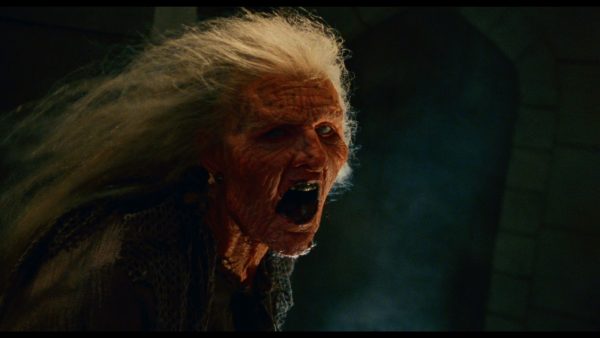 I’m just here to let you know if this new edition (I was sent the handsome SteelBook version, which is very nice but lacks the iconic cover art found on the non-SteelBook version) is worth the price. I’d say the answer to that is an enthusiastic “Yes!” if you haven’t scooped this one up on home video before or have one of the older DVDs or Blu-rays that are pretty bereft of extras.

If you have the three-disc Blu-ray previously released by Shout!, then the answer to that question is: “It depends on whether this new 4K version is worth the upgrade to you.” As I said, it’s glorious, although the higher resolution definitely draws more attention to the imperfections in the old school practical effects. I know that’s a big part of its charm, though, so that’s not a drawback for me; just noting that in case you care. 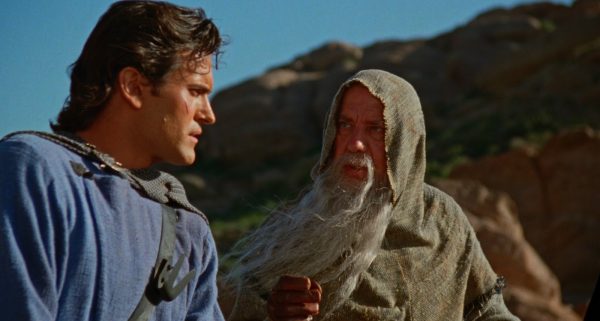 If you haven’t seen Army of Darkness before, here’s a quick rundown of the story: When our hero Ash Williams (Bruce Campbell) was last seen at the end of Evil Dead II, he and his beloved car had been pulled through a portal into the Middle Ages. The third installment in the Evil Dead series finds Ash having to fight off hordes of the undead, who are unleashed thanks to his ineptitude, so he can get back to the modern era and his job at retailer S-Mart.

While it’s technically a horror film, Army of Darkness is really more of a comedy that says to the audience: “Let’s have fun with this guy named Ash, who kinda bungles things and has to survive by his sheer wits, but he’s good-looking and charismatic, so cut him some slack. It will all work out in the end, minus the deaths of a few people that probably could have been avoided.” 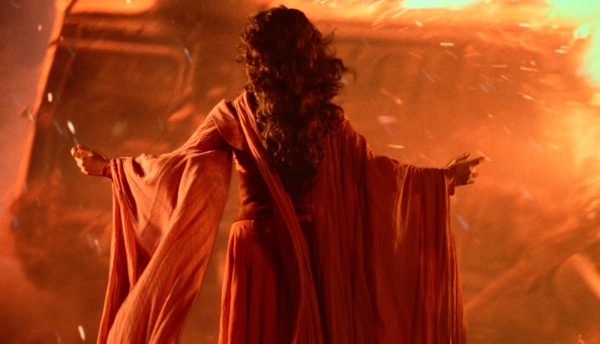 As Campbell points out in the excellent 96-minute Medieval Times: The Making of Army of Darkness documentary found on disc two, Ash is a bit of a pompous jerk, but he’s still a lot of fun to watch onscreen, so just roll with it. (Or, “Give me some sugar, baby,” as Ash would say.) Among many other subjects, Campbell also addresses the lack of the words “evil” and “dead” in the film’s title, noting that the studio insisted on releasing it with a non-Evil Dead name, even though it’s the third in a trilogy.

Plenty of members of the cast and crew show up in Medieval Times, along with vintage on-set footage, including Raimi’s brother Ted Raimi, but the director is nowhere to be found, unfortunately. However he does show up in some commentary tracks, including optional commentary with Campbell on a 3-minute alternate opening and 11 minutes of deleted scenes. Those are also found on disc two, along with the original ending, which is used in the director’s cut on disc three, where it’s in much better shape. 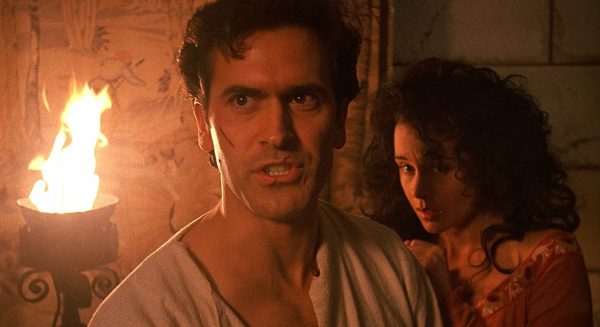 On disc three, the director’s cut Blu-ray, you’ll find a commentary track with Raimi, Campbell, and co-writer Ivan Raimi (yes, another Raimi brother, although this one makes his living as a physician). Ivan shows up partway through, but Sam and Bruce are there the entire time; they’ve known each other since they were kids, and it shows in the friendly banter between them. Sometimes the track is more about listening to them chat with each other than learning about the film, but that’s a common pitfall with group commentaries.

Moving on, disc three has a few more supplements, including nearly an hour of on-set and behind-the-scenes footage spread across two extras, one of those old school EPK (electronic press kit) making-of featurettes, and 5 minutes of extended interviews. There’s also a new featurette on the creation of the Deadites, as the undead are known in this film. 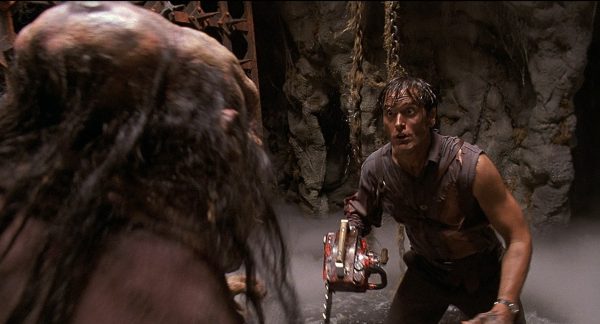 The director’s cut adds 15 minutes of runtime to the theatrical version’s brisk 81 minutes. The differences between it, the theatrical version, and the international cut are too numerous to list in this review, so if you’re not already a fan, I would recommend watching all of them and deciding on your own. Personally, I’m usually partial to directors’ visions, so this disc has the one I like, including the aforementioned original ending that was changed after preview audiences gave the film poor scores.

Finally, disc four has the International cut along with a couple still galleries, 7.5 minutes of storyboards, and The Men Behind the Army, a 19-minute vintage featurette that takes a look at the practical effects.