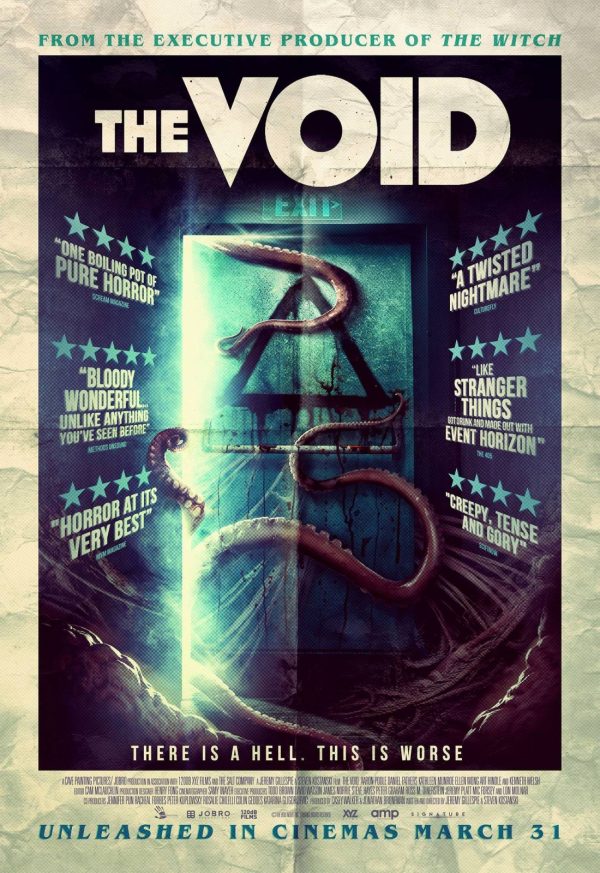 A group of people find themselves trapped in a hospital by a mysterious group of cultists and nightmarish creatures. 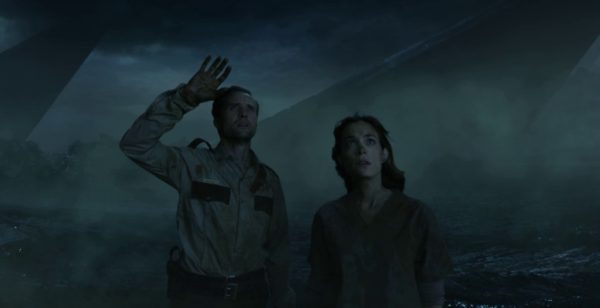 Of all the horror sub-genres out there, among the most fascinating and frightening is cosmic horror. Popularised by author H.P. Lovecraft, cosmic (or, as it’s sometimes called, Lovecraftian) horror stories regularly depicted ordinary protagonists forced to confront otherworldly horrors from beyond the veil that they had no hope of defeating or even comprehending, with these tales often laced with bleak existentialist commentary on humanity’s insignificance. Cosmic horror is notoriously challenging to depict on-screen, with even the best efforts still leaving much to be desired. Enter today’s entry, the Canadian cosmic horror The Void, an ambitious film that, despite a valiant effort, still falls short of doing this tricky subgenre justice.

The Void plays like a mishmash of various 80s horror cult classics, particularly those made by John Carpenter, combining elements from Prince of Darkness, The Thing and Assault on Precinct 13 with their stories of heroes under siege against evil forces. Borrow the hospital setting of Halloween II and throw in a booster shot of Lovecraft, and you have yourself a tense, terrifying siege in which our everyday heroes find themselves up against a mysterious white-robed cult and cosmic monstrosities seemingly borne from their nightmares. 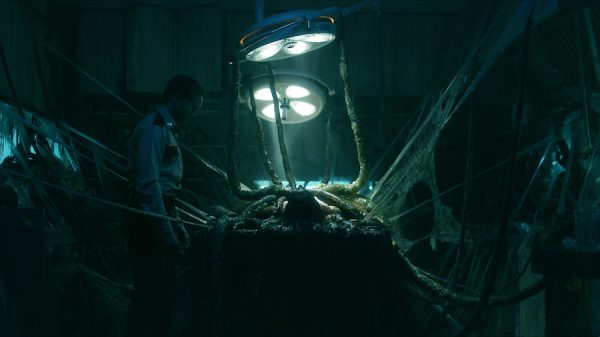 While I appreciated aspects of the story, such as its mostly ambiguous approach that honours Lovecraft’s notion that cosmic horror is so nightmarish and horrifying that it defies human comprehension, where things start to fall apart are with the characters. The characters are dull and, more often than not, highly irritating, spending most of their screen-time screaming and threatening to kill each other in a repetitive cycle of raised voices and guns that quickly becomes a grating reminder of every family reunion I’ve ever attended. The increasingly questionable writing of the characters extends to the dialogue, which often reveals backstories via clunky, unnatural sounding “Well, as you know….” type exposition only ever spoken by characters in films.

The irritating writing of the characters only undermines the performances of the actors, who are trying their best with what they have to work with, but even their best efforts can’t make me care when the monsters start to pick them off. Although I did appreciate the late Kenneth Welsh’s turn as the mysterious Doctor Powell, his often quiet, cold, and increasingly sinister delivery managed to make his admittedly stock dialogue seem at least mildly menacing.

While the characters might not be up to scratch, I won’t deny that The Void is well made, with the filmmakers making the most of their limited budget and locations. The cinematography, while prone to repeated moments of overly shaky hand-held camera work, does have the occasional visual flourish. I especially liked the shot of protagonist Daniel (Aaron Poole) as he mercy kills another character (to reveal who would be a spoiler) with an axe. The camera slowly pulling back through a dark, dingy hall, with only his silhouette visible through a window that becomes increasingly soaked with blood as the shadow of the axe rises and falls.

If there is any reason to watch The Void, then it is, without question, the special effects. Although the film was made on a limited budget, no expense was spared in bringing to life the various tentacled, multi-limbed, skull-faced howling beasts that would make Lovecraft proud and possibly give even him nightmares. The monsters and transformations of humans into these creatures are horrifying and stomach-churning, the film littered with scenes of claws sprouting from mouths, tentacles prying their way down throats and into eyes, wombs bubbling and slithering with monstrous offspring lurking within, and heads exploding with loud wet splashes of gore-soaked goodness. 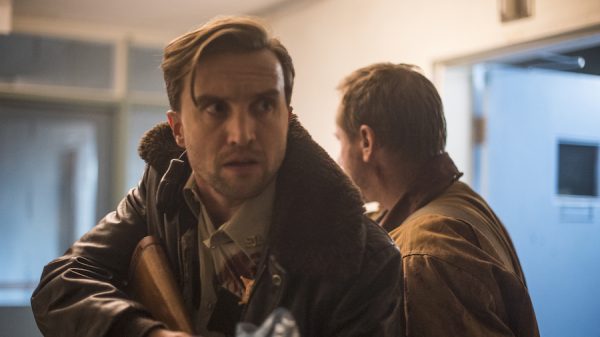 It’s unimaginable stuff that is made all the more nightmarishly beautiful and impressive by the fact that it was done via mostly practical means, with CGI used sparingly. I particularly liked the demonic big bad who appears at the end that, while might not as impressive as some of the other monsters, still comes across as a fearsome-looking villain thanks to the fantastic make-up effects that render the actor as a dark, scaly-skinned demon from another dimension. That and I bring him up because he looks like the lost brother of Vecna from Stranger Things.

The only issue with the effects is that, although they are top-notch, they overshadow everything else about the film, with the characters and story often feeling like afterthoughts. Almost as if the filmmakers created the effects and then attempted to write a story around them. This issue extends to the pacing, with there often being long stretches between monster encounters that feel like padding so the film could reach feature length. In all honesty, the film would have worked better as a short, with it not having enough story or character development to justify its noticeably strained 90-minute runtime. 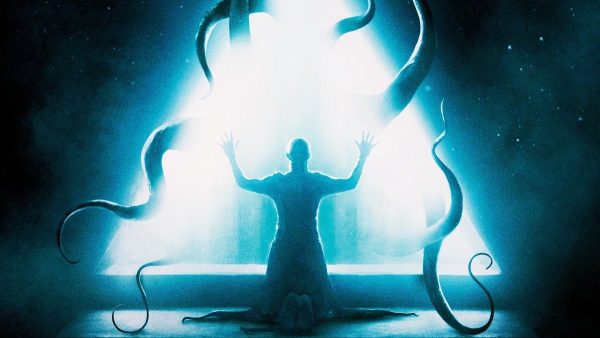 I wrestled with my final rating on The Void. I can’t help but admire the ambition of the filmmakers who craft an unsettling ambiguous story that doubles as a fun throwback to 1980s creature feature/body horror and a love letter to Lovecraftian cosmic horror. I also can’t deny the mastery of the special effects, demonstrating that you can’t beat the horrifying authenticity of practical effects.

However, the brilliance of the effects overshadows the rest of the film and leaves us with annoying characters that, despite the cast’s best efforts, we struggle to care about, coupled with pacing that drags whenever the monsters aren’t around. In short, The Void could have been something great, but, as it stands, it’s an ambitious, highly admirable, yet somewhat disappointing curiosity.