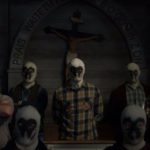 After months of short teasers and little information, HBO has finally released the first teaser trailer for the Watchmen TV series. From Lost showrunner Damon Lindelof, the series will be both a sequel and original story to the graphic novel from Alan Moore and Dave Gibbons. Watch the teaser below… Watchmen followed an alternate history where superheroes […]