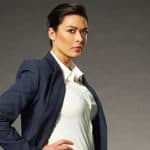 Deadline is reporting that DC’s Legends of Tomorrow has added Canadian actress Aliyah O’Brien for a recurring role in its upcoming sixth season. The actress, whose credits include Take Two, Ascension and Monster Trucks, is set to portray Kayla, described as “a fearsome warrior with a high body count and low patience for human incompetence. […]