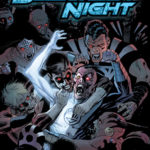 Last month, DC Comics announced a new series of prestige one-shots under the banner of Tales from the Dark Multiverse, presenting dark and twisted reimaginings of some of the biggest events in the DC Universe. First up in October are Batman: Knightfall and The Death of Superman, and now the publisher has revealed that they’ll be followed […]