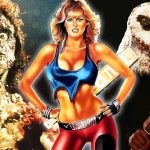 EJ Moreno with 10 obscure slashers from the 1980s… When you hear the term “slasher movie,” the images that comes to mind are the hockey mask of Jason Voorhees, Freddy’s glove, and Laurie Strode standing strong over Michael Myers. But what do you think of when you dig deeper? And I’m not even talking bout […]

It’s the start of a new month, and as ever in film and Blu-ray circles, nothing gets the fans salivating more than the upcoming release slate from the awesome folks over at Arrow Films. Its line-up of releases for August has been unveiled (both UK and US), and you can view all the information below, […]