20th Century Fox has announced that filming on its Freddie Mercury biopic Bohemian Rhapsody has been suspended “due to the unexpected availability” of director Bryan Singer, who is dealing with a health issue. A representative for Singer stated that it relates to “a personal health matter concerning Bryan and his family [and that] Bryan hopes to […] 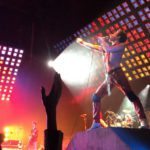 Bryan Singer has given his blessing to the director of X-Men: Dark Phoenix. News arrived yesterday that Simon Kinberg would be directing the next X-Men film in the franchise, Dark Phoenix. Singer has been perhaps the most influential person on this particular movie franchise, having directed all but two of the main team movies. But […]

Earlier this week it was announced that Fox and Marvel’s X-Men series The Gifted has received a full series order and will hit the airwaves later this year. The news was accompanied by a first teaser [watch it here], and now director Bryan Singer has shared a behind-the-scenes shot on his Instagram page, which gives […]

We’ve got another Marvel series to look forward to this year, as Fox has officially announced that it has given a series order to the X-Men series The Gifted from writer and showrunner Matt Nix (Burn Notice). Coinciding with the news is a first teaser trailer featuring footage from the pilot episode, directed by X-Men regular […]

As filming continues on Fox and Marvel’s X-Men series Gifted, director Bryan Singer has taken to Instagram to reveal that Stan Lee will be making his customary cameo appearance in the pilot episode of the show, with Singer sharing the following image: Gifted will mark the third time that Singer has directed Stan Lee after […]

Deadline is reporting that Bryan Singer is teaming with the digital media company Blackpills for August One, a sci-fi thriller series which takes place in a world where the Roman Empire never fell. Created by John Cabrera, August One is being produced by Singer’s Bad Hat Harry and is set in a society “on the […]

Mashable recently conducted an interview with Bryan Singer (frequent go-to director for many of the X-Men films), who is serving as an executive producer on both FX’s Legion and another untitled X-Men TV show to air on Fox. Singer was recently announced as directing the pilot for the as-yet-unrevealed series, and has discussed bringing Marvel’s mutant heroes […]

Fox have signed up Bryan Singer to direct the pilot for their untitled X-Men TV series. From 20th Century TV and Marvel Television, the show will centre on two ordinary parents who discover their children are mutants and are then forced to go on the run to protect them. Matt Nix (Burn Notice) is writing […]