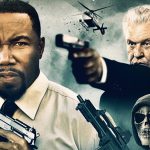 Dazzler Media brings the action-thriller Cops and Robbers to the UK this month, and we’ve got the official poster and UK trailer for the film, which sees Michael Jai White (Arrow, The Dark Knight) starring alongside Tom Berenger (Inception, Platoon) and former UFC champion, Quinton ‘Rampage’ Jackson (The A-Team, Boss Level). In this slick action-thriller, […]