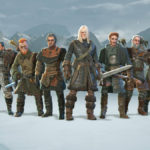 Behaviour Interactive, GAEA and HBO have announced Game of Thrones Beyond the Wall, a brand-new mobile strategy RPG. In Game of Thrones Beyond the Wall, players will take command a castle of the Night’s Watch to defend Westeros using the characters you recruit throughout the Seven Kingdoms. However, the game’s narrative is not set during the same […]