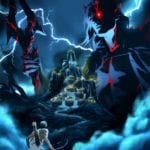 Netflix has announced that it is expanding its original anime output with a new eight-episode series entitled Gods & Heroes, which is inspired by Greek mythology and follows the illegitimate son of Zeus as he is tasked with saving heaven and earth despite the interference of a vengeful goddess and her monstrous forces. Check out […]