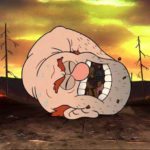 Following his recent sexual misconduct scandal, The Disney Channel has removed Louis C.K.’s voice work from a 2015 episode of the animated series Gravity Falls. The comedian portrayed the character of The Horrifying Sweaty One-Armed Monstrosity in the three-part episode ‘Weirdmageddon’, but the episodes have now been redubbed. “The role was rerecorded approximately one month ago […]

Back in November, Gravity Falls creator Alex Hirsch announced that he was bringing the popular Disney XD animated series to an end with the season two finale. However, speaking to EW ahead of the final episode, Hirsch has now given fans hope of that the show may return at some point in the future. “[A […]

Gravity Falls creator Alex Hirsch has announced via Tumbler that the Disney XD animated series is coming to an end with the upcoming hourlong finale to season two. “The first thing to know is that the show isn’t being cancelled – it’s being finished,” states Hirsch. “This is 100% my choice, and its something I decided on a […]