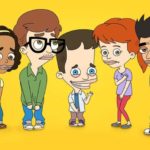 The animated hit series Big Mouth finally has a premiere date for its upcoming second season. The streaming service revealed the series will premiere the new season on October 5th and released a trailer to go along with the announcement. Watch the trailer below… Big Mouth follows a group of seventh graders as they deal with the […]