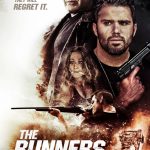 Uncork’d Entertainment has released a poster and trailer for the upcoming action thriller The Runners which stars Micah Lyons as Ryan, a man in a race against time to save his teenage sister (Netty Leach) after she is abducted with the intention of selling her to the cartel for human trafficking. Joining Lyons and Leach […]