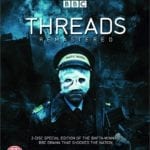 Threads, 1984. Directed by Mick Jackson. Starring Karen Meagher, Reece Dinsdale, and David Brierly. SYNOPSIS: Sheffield, England in the 1980s. Several people try to survive post-nuclear devastation, suffering from the effects of nuclear war between Russia and the United States. While the world isn’t exactly the same as it was back when this film was produced, […]