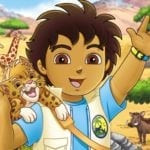 Paramount Players and Walden Media’s live-action Dora the Explorer movie has found its Diego, with Micke Morena (Escobar: Paradise Lost) joining the film as the cousin of Isabela Moner’s (Sicario: Day of the Soldado) title character. The adaptation of the hit Nickelodeon animated series will follow a teenage Dora as she sets off on an […]