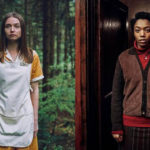 Channel 4 has announced that Naomi Ackie (Star Wars: The Rise of Skywalker) has joined the cast of the second series of the award-winning The End of the F***ing World, with the network unveiling the above first look images of Jessica Barden’s Alyssa and Ackie’s mysterious new character Bonnie. The second series of the RTS […]