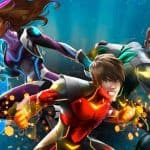 Deadline is reporting that Lena Headey (Game of Thrones) and Luke Wilson (Stargirl) have joined Finn Wolfhard and his brother Nick Wolfhard in the voice cast of New-Gen, an animated series adaptation of the comic book series from J.D. Matonti, Chris Matonti and Julia Coppola and published by Marvel. As per Deadline, the series will […]