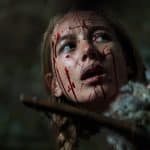 Moviegoers got a preview of the new Wrong Turn installment on January 26th, for a one night only Fathom Events theatrical screening. The film, written by the original 2003 Wrong Turn screenwriter Alan B. McElroy and directed by Mike P. Nelson, is now being widely released on VOD, Digital, Blu-ray and DVD February 23rd. The […]