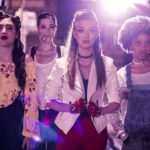 Following on from its premiere at the Inside Out LGBT Film Festival, we’ve got an exclusive clip from the ” supernatural, super feminist, and super queer” vampire film Bit, which sees trans activist/actress Nicole Maines (Supergirl) starring alongside the likes of M.C. Gainey, Diana Hopper and James Paxton. Check out the clip below along with […]