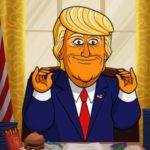 Brace yourselves for a Twitter outburst, as Showtime has released the first trailer for its upcoming animated comedy series Our Cartoon President. Executive produced by Stephen Colbert and showrunner R.J. Fried, the half-hour comedy series takes us inside the White House for a satirical look at the Trump Administration. Check it out here… In this […]