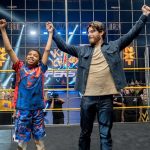 Coinciding with its arrival on Netflix, the streaming service has released a poster and trailer for WWE Studios and director Jay Karas’ wrestling comedy The Main Event which stars Seth Carr as Leo Thompson, an 11-year-old boy who enters a competition to become the next WWE Superstar after finding a magical wrestling mask that grants […]