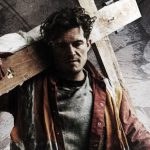 Retaliation, 2017. Directed by Ludwig Shammasian and Paul Shammasian. Starring Orlando Bloom, Janet Montgomery, Anne Reid, James Smillie, Charlie Creed-Miles and Alex Ferns. SYNOPSIS: Decades after he was molested by a Catholic priest, a man deals with his abuser’s return as he is tasked with demolishing the church where the crimes took place. Over the […]

Saban Films has released a poster and trailer for the thriller Retaliation which stars Orlando Bloom as a man who sets out on a path of vengeance against a disturbing figure he holds responsible for a traumatic childhood incident; take a look here… Orlando Bloom stars as Malky, a demolition worker whose life receives a […]