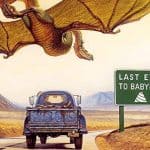 Game of Thrones author George R.R. Martin is reuniting with HBO for another fantasy project, although this time it isn’t based upon one of Martin’s own works, but rather an adaptation of Roger Zelazny’s 1979 novel Roadmarks. As reported by Deadline, Martin will serve as an executive producer on a TV adaptation of the book, […]