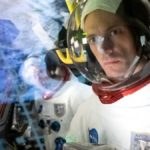 Apple has released the first trailer for their upcoming sci-fi series from Ronald D. Moore, For All Mankind. The series imagines an alternate history where the Soviet Union beat the United States to the moon and the space race never ended. Watch the trailer below… For All Mankind stars Joel Kinnaman (Altered Carbon), Michael Dorman (Patriot), Sarah […]